Rockies romp as Cook and Cargo whip up some Fish stew.

Share All sharing options for: Rockies romp as Cook and Cargo whip up some Fish stew.

The Rockies rode two big innings early and a solid performance from starting pitcher Aaron Cook to a 12-5 victory over Florida on Wednesday. The Rockies broke out against Ricky Nolasco early, scoring five runs in the first inning, and then tacking on six more in the third for a quick 11-0 lead. From there they just held on and let Cook do the rest.

Carlos Gonzalez and Chris Iannetta each had four RBI, alternating whether they would have the big the bases clearing hit (Iannetta's bases clearing double in the first, or Cargo's 3 run bomb in the third or a smaller supporting single RBI in the Rockies two big innings. For Gonzalez, the HR marks the second time in this past week that he's homered in back to back games.

Aaron Cook pitched seven and two thirds innings, and walked none while giving up nine hits and three runs. There were a lot more flies than typical for Cook, but the game until the eighth inning still seemed to flow quickly with weak contact like it does when he's at his best. This was good, because with a spent bullpen from the last couple of close contests, the Rockies were relying on Cook to get deep into the game.

Todd Helton had two hits, and has now been on base as many times in his career as Roberto Clemente (3,656 times, if you wanted to know.) Dexter Fowler scored three times and after yesterday's 0 for 5 hiccup, showed that he still has the Marlins number over the last two seasons (batting .343 with 14 runs scored  in eight starts, and six of twelve hits going for extra bases). 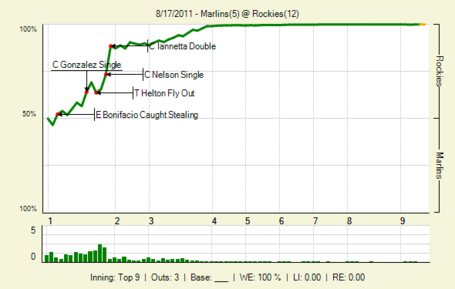 Turned out that I probably didn't need the overflow after all.