The Diamondbacks have surged to a 2.5 game lead in the division, thanks to being the only above-.500 team in the division after the All-Star Break and the only NL West team with a positive run differential.  But with 2011 looking rosy in the desert, Kevin Towers and company aren't just focusing on the present.  After Monday's signing deadline, the Diamondbacks are sitting pretty with their draft class for the future.

The D-backs were the first team in MLB history to have two of the top seven picks, so they would be expected to have a good draft.  Trevor Bauer, arguably the best college pitcher in the draft, is already dominating at AA and could be in sedona red in mere weeks, but he isn't the pick I'm most impressed with.  That would be Archie Bradley, whom Arizona drafted and signed with the 7th pick, which was compensation for unsigned 2010 1st round pick Barret Loux.  With Bauer already locked up with an MLB deal, no one would blame them for going with a high floor, low ceiling easy-sign in the 7-slot.  Instead, they picked arguably the best high school arm in the draft (with apologies to Dylan Bundy) and bought him out of his commitment at Oklahoma.  The result is a ridiculous stable of upside arms on the farm in Bauer, Bradley, Jarrod Parker, Tyler Skaggs, David Holmberg and Pat Corbin.  That aggressive approach earns my respect.

I made my disappointment in the Rockies draft class known Tuesday.  After dealing their ace to make up for a weak farm, the Rockies spent very little on their draft, going notably overslot only on Trevor Story, and not greatly so.  Third round pick Peter O'Brien did not sign, 1st round pick Tyler Anderson was at slot, and the remainder of their picks before the fifth round are a long way off as high school picks.  It will not be as poor as the 2006 draft, but I fear we will regret how it was handled all the same.  It is worth noting, however, that the Rockies will receive an additional draft choice in the 3rd round next year for failing to sign O'Brien.

While the Dodgers were under MLB control, their ability to go over slot was severely cut.  Thusly, Ned Colletti had to take safe, signable picks, which he did, and predictably, the Dodgers came up near the bottom of the league in money spent.  The disaster of a year in Dodgertown nearly got worse with the draft, as it came to light after the draft that 1st round pick Chris Reed had hired Scott Boras.  Reed did sign for $1.589million to salvage the draft.

The Padres had two first round picks and three supplemental picks, and Jed Hoyer went youth, picking four men in the top 54 picks that were 20 or younger.  Supplemental pick Michael Kelly had his bonus reduced after a suspect MRI and Brett Austin didn't sign, so the glut of talent selected in the top 60 picks might not prove too impactful.

The Giants have built their World Series Champion team largely through the draft, but their 2011 crop isn't particularly awe-inspiring.  They first turned heads by selecting Joe Panik in the first round, commonly thought of as a utility infielder type.  Their supplemental draft choice Kyle Crick has legitimate talent, even if he has very poor taste in twitter avatars.  Slugger Ricky Oropesa is an interesting choice in the 3rd round.

Divisional Change:  Increased their lead to 2.5 games in the division.

This Week:  Arizona concludes their last road trip east of Colorado with a 3 game road series @ Braves and 4 game road series @ Nationals.  Aside from a 3-game series at Coors Field September 5-7, the remainder of their games will be in the Pacific Time Zone after this week.

News:  The Diamondbacks may acquire a shortstop this month, and they are interested in Edgar Renteria, but the Reds won't deal him.

After Jason Marquis' injury, theDiamondbacks went internal to replace him.  Wade Miley got the call, but don't be too surprised if Trevor Bauer is in the rotation in September.

Ken Rosenthal mentions that the Diamondbacks shouldn't be ruled out of acquiring Houston's Wandy Rodriguez,though I doubt it will happen.

Ian Kennedy is having a marvelous year, and Kennedy would listen if approached with a long-term exptension.

You Should Know:  The Dodgers actually have a positive run differential since the All-Star Break, along with every team in the division other than the Giants.

Divisional Change:  Fell a half game further back.

News Ted Lilly cleared waivers, but don't expect him to be picked up.  Ungood contract.

Casey Blake has been injured all season, but Blake isn't going to retire after the season.

The Dodgers areon pace to lose $42million since in the last two years.

Transactions:  Called up IF Justin Sellers from AAA Albuquerque, which prompted this golden tweet.

Injuries:  3B Casey Blake was scratched from yesterday's lineup with a sore shoulder.  He is day-to-day.  RHP Jonathan Broxton (elbow) has begun throwing regularly again.  RHP Kenley Jansen is slated to start a rehab assignment Sunday.  IF Juan Uribe received a cortisone shot Thursday for his hip strain.  Dee Gordon threw Tuesday for the second time in an effort to return from a shoulder contusion.

News:  The Padres lowered the bonus they agreed to with sandwich pick RHP Michael Kelly by over a quarter million dollars after seeing the results of an MRI on Kelly's shoulder.  They did the same thing with RHP Tim Stauffer when they drafted him 4th overall in 2003.

Now it has taken on a new turn.  2007 supplemental pick Drew Cumberland, one of the Padres best prospects, has been forced to retire due to, of all things, an inner ear condition.  It is called bilateral vestibulopathy, damage to both inner ear canals which migraines, loss of balance and vision problems.  What rotten fortune for Cumberland and the Padres.
The Padres seem to create relievers out of thin air.  Tyler Kepner brings up Josh Spence as the latest case.

Injuries:  Activated C Nick Hundley from the 15-day DL (8/12).  3B Chase Headley is still a couple weeks from having his cast removed from his fractured pinky - he should return to game action next month.  LHP Clayton Richard was cleared to begin range of motion exercises on Wednesday, but he will not return this season.  OF Chris Denorfia (Sunday) and RHP Ernesto Frieri (Tuesday) started their rehab assignments last week.

You Should Know:  Eighteen different Giants have gone to the disabled list this season for a total of 21 DL trips.  Here is a pictorial of the bumps and bruises by the bay.  Out of their Opening Day lineup, all except Aubrey Huff has been on the DL this season.

Divisional Change:  Lost the division lead and fell to one game behind.

News:  The Giants wanted Hunter Pence at the deadline, but the Astros asked for one of Zack Wheeler, Brandon Belt, Gary Brown or Charlie Culberson "plus plus."

Former top prospect Angel Villalona is suing the Giants for $5million for unlawful termination of contract.  The Giants terminated his contract in 2009 after he was charged with murder in the Dominican Republic.  Good luck, "Angel."

Brian Wilson is having a down year, though part of it may be due to nagging subtle injuries to his back and elbow.  As shown here, Wilson has gone from steadily improving to elite status to a rapid drop to below league averagein K/BB, one of the best metrics for evaluating the effectiveness of a reliever. 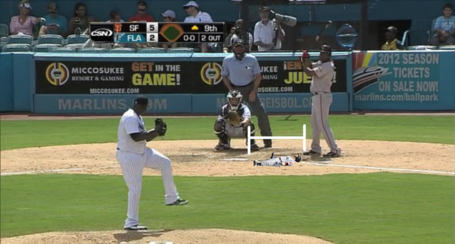 Grant Brisbee went over the rotten luck the Giants have had this year (you know, except for 1-run games).  Your weekly amusing read.

Injuries:  August 16 was Injury Day in San Francisco.  Nine days after he last played the Giants finally placed OF Carlos Beltran on the DL (8/16).  RHP Serigo Romo also landed on the DL that day.  LHP Jonathan Sanchez sprained his ankle that day and came out of the game, but he should be good to go.  OF Aaron Rowand came down with a strained side on the 16th and is day to day.  We also found out Tuesday the 16th that IF Jeff Keppinger is day-to-day with a sprained wrist; he saw a hand specialist Wednesday.  RHP Brian Wilson is out for a few days with an inflamed elbow and is trying to avoid the DL.  Oh, and CF Andres Torres landed on the DL Sunday.   LHP Barry Zito and OF Pat Burrell are already on the DL - Burrell may return next month, but Zito is out indefinitely.