Hey Jason, Alex White is Coming. Should He Take Your Spot?

Share All sharing options for: Hey Jason, Alex White is Coming. Should He Take Your Spot?

Remember a couple of seasons ago where we joked about blindfolding Jason Hammel and driving him around so that he thinks he's on the road? Yeah, those were funny days. But seriously someone drive Jason Hammel around with a blindfold before starts now, ok?

After writing today's Rockpile, I never thought that I'd be thinking about anybody else losing their roster spot other than Esmil Rogers to make way for Alex White.

(For reference, a Game Score of 50 is defined to be an "average" start. There's more on Game Score in the above linked Wikipedia article.)

I'm having trouble getting behind Jason Hammel anymore. I used to love defending him, because really, he did a lot of good things. But now that seems to be a distant memory. His fastball command is gone, he's walking hitters like he never has in a Rockies uniform, and he's depending on the defense for like 85% of his outs.

Sad thing is, even Jason Hammel isn't really behind Jason Hammel. If you listened to his postgame interview, he knows how much he's stinking, he's really frustrated by his own performances, and he's trying to put the imminent callup of Alex White out of his mind. He seemed to be very aware of the hole that he is digging himself, and for his sake, I hope he starts digging "up".

Here's another thing: Chris Nelson went 1-for-4 on the night. That's a .250 AVG. Do I call that a crappy night, considering that he had one of the Rockies' 5 hits? Nelson, Carlos Gonzalez, Tulo, and Todd Helton combined for the 5 hits the Rockies had on Friday night. Jonathan Herrera pinch-walked for Hammel in the 3rd and scored one of the Rockies' precious 2 runs. 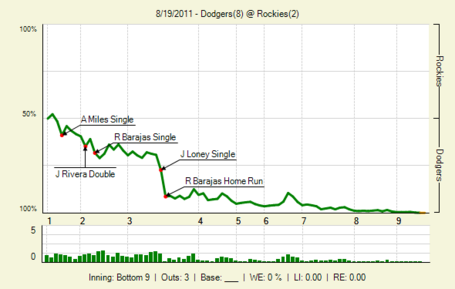 (No Roll Call tonight, the tool appears to be broken - at least the past 4 times I tried it, it timed out.)