Phillies 5, Rockies 0: It Has Come to This - Kyle Kendrick Dominates Rockies

Share All sharing options for: Phillies 5, Rockies 0: It Has Come to This - Kyle Kendrick Dominates Rockies

If you were going to introduce a friend to the game of baseball, tonight's game would have been a very poor choice.  It wasn't just that the Rockies played quite poorly - that has happened frequently of late.  No, this game just held zero intrigue from Pitch 1 to Pitch .

Aaron Cook walked the leadoff man in the first inning on four pitches.  Shane Victorino singled after the walk, giving the Phillies a runner on third with no outs in the first inning.  The Rockies didn't get a runner to reach base all game.  That fantastic sinker that arrived last Thursday for Cook was completely absent.  Cook left after four innings with neck spasms after allowing four runs.

At least the offense was facing Kyle Kendrick right?  The Rockies always pummel him......but not tonight.  No, instead, they managed just four hits in eight shutout innings against the Phillies' sixth (seventh?) starter.  He set a career high with seven strikeouts, while working 5+ shutout innings for just the fifth time in his career.

Don't blame Jim Tracy on this one either.  This wasn't a function of the B-lineup, as Tracy fielded arguably the best available lineup.  The men in purple pinstripes just didn't put up much of a fight tonight.  Mark Ellis went ofer-three to extend his hitless streak to 24, as the 3-7 hitters failed to get a hit on the night.

On the bright side, Edgmer Escalona worked three shutout innings in relief, allowing just two hits.  Dexter Fowler walked and very nearly hit an his first home run of the season (and first opposite field home run of his career) in the first inning, a double down the left-field line.  He struck out twice.  That's...about it.

Tomorrow, the Rockies will try to avoid their first home sweep of the season.  All they have to do is beat Roy Halladay. 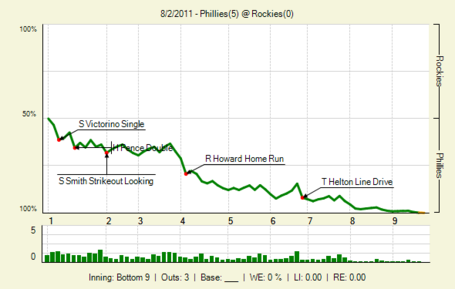