Q: How many Rockies does it take to beat the Dodgers? A: 22.

Share All sharing options for: Q: How many Rockies does it take to beat the Dodgers? A: 22.

The Full Roster. Kevin Millwood, Jhoulys Chacin and Edgmer Escalona. Those were the three Rockies on the 25 man roster not to see any action in the 13 inning battle.

The At Bat. Helton vs. Guerra. Down 6-4 and after falling behind 1-2 and three point five gazillion pitches later, Todd Helton came through in the bottom of the twelfth with the hit that saved the game. Somebody was just mentioning the other day that Helton's doubles weren't memorable. Let double #553 be forever seared into your collective memories, Rockies fans, as one worth bringing up.

The Redemption. Helton's double would have tied the game, and the subsequent Eliezer groundout to score Troy Tulowitzki would have won it had Dexter Fowler not made a poor decision to dive for a catch on a Trent Oeltjen drive in the first half of the inning. Already down 5-4, Oeltjen's inside the park HR gave the Dodgers that 6-4 lead. So, in the 13th inning, after a Mark Ellis double, Fowler came up with a chance to make amends.

Amends were made. The Rockies won 7-6. The best game of the season? Perhaps? Was anybody able to see it? Only a few hearty souls. 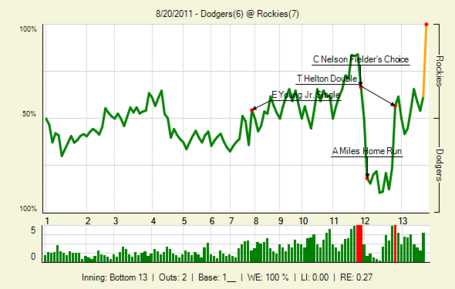