Huzzah, Rockies fans. Huzzah! For the first time in 18 Sundays (126 interminable days), I am able to write about a Rockies victory. And all I had to do was get up off of my butt and go to the game. Colorado's 2011 Sunday record when I attend: 2-0 (6-1 overall). The Rockies' record when I do not: 1-17. The starting pitchers of those wins: Alan Johnson and Kevin Millwood. That's a large enough sample size for me to decide that I need to be attending more Sunday games.

Today's contest, a sold-out affair against the division rival Dodgers, featured two key 2 run homers by the Rockies -- one a laser by Carlos Gonzalez (21) in the first, shortly after I reached my seat, to give Colorado the early 2-0 -- and the other a seventh inning bomb to the second deck in right by Seth Smith (14). Against all odds, Colorado managed to put up more runs than they had hits (5 to 3) -- heck, Smith's HR was the only hit they got after the first inning. That's right, you read that correctly -- the Rockies got two HRs and one single and won the game.

Kevin Millwood, who possesses the heart of a champion and the reactions of a cat, was decent against everyone except James Loney (4-4, 2B, HR) and Matt Kemp (2-4, 2B) while making several great defensive plays. He lasted 7 innings, giving up 3 runs on 7 hits while striking out 4 to get his first win of 2011 (1-1), while Rafael Betancourt recorded his 2nd save. It should also be noted that Chris Nelson acquitted himself with style and aplomb at the hot corner as well.

It was a wonderful day at the ballpark, and I look forward to the pleasure of being invited to many such events at the behest of the Rockies, eager to stop me from watching Sunday games at home. 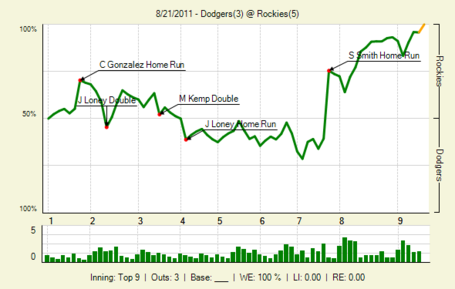 We Are Disappointed In: Eliezer Alfonso (-.083 WPA)