Let's pretend for a second that the top of the ninth inning didn't happen (or that Jim Tracy went against the grain for once and used his closer for what closers are supposed to do - close games). The Rockies would have won by eight runs and thus, walked away from tonight's game with a +1 run differential. That would have been extremely cool to brag about on Twitter. But alas, that was not the case, as J.C. Romero decided to suck it up by giving up four runs (though a Chris Nelson error didn't help) - including a three-run homer to Matt Downs - in the ninth before giving way to Josh Roenicke and eventually Rafael Betancourt, who struck out Clint Barmes to end the game (AND ACTUALLY GOT A SAVE) as the Rockies escaped with a four-run victory.

Regardless of the ninth inning follies, the Rox played a heck of a game offensively, and got themselves to 8.5 back in the division in the process. In fact, they got all the runs they would need in their first at-bat. Carlos Gonzalez got the party started with a two-run double (and hit a solo homer the next inning). Todd Helton and Mark Ellis pitched in RBI singles to make it 4-0, then Jhoulys Chacin made stuff weird by crushing a two-run double into the left-center field gap to stretch the lead to 6-0. All of this came, mind you, against Brett Myers, who entered the game with a lifetime 7-0 record against Colorado.

After CarGo's homer, the Rox were kept quiet until the eighth inning, when Chris Nelson smacked a two-run single up the middle to increase the lead to 9-1.

Chacin gave up 11 hits in seven innings, but he threw a ton of strikes (73, compared to just 33 balls) and capitalized on the fact that the Astros were clueless as how to hit with runners on base. His two strikeouts, one walk, and 12 groundball outs resulted in one heck of a Bob Apodaca Gem.

Good win for the Rox, who will hopefully continue to take advantage of playing a 42-86 team and keep gaining ground on the Giants and Diamondbacks. Also, please get J.C. Romero off of my team.

The usual stuff after the jump... 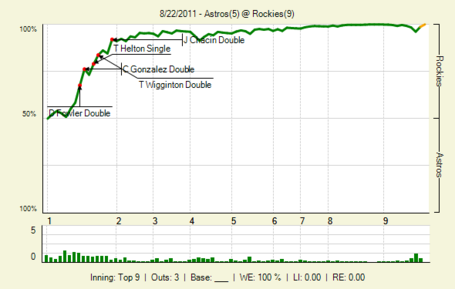