In my career as a baseball fan, there's been two "crazy" strategic situations I've always wanted to see happen in a major league baseball game. The first is typically an extra innings affair. You get a runner on 3B with less than 2 outs in a walkoff situation. The visiting team then walks the bases loaded, brings the infield in, and then brings one of their outfielders directly behind 2B. The idea of this play is that A. there's a force play at every base, and B. there's really no chance of a ball getting out of the infield. It's one of those last ditch attempts to not lose, because if anything gets to the outfield, the game is over.

Last year, at Dodger Stadium, the Nats were playing the Dodgers, and in the 10th inning, this exact situation happened. James Loney ended up hitting a single to the outfield, and the Dodgers won. Upside: it happened. Downside: I was attending with my grandmother who requested we leave after the 9th (and according to my uncle, she was a trooper for sticking it out that long). So I got to hear this happen on the radio. I still haven't seen it happen in a MLB game, but earlier this season I saw the Fresno Grizzlies pull that exact play against the Sky Sox. It ended up working for them, the Sox didn't score. They ultimately won THAT game on virtue of a Jeff Salazar walkoff homer.

The other thing I've always wanted to see happen happened tonight. But we'll get back to that in a second.

Tonight was the much vaunted debut of Alex White, one of the 4 players acquired in the Ubaldo Jimenez trade. After about 15 innings of shutout baseball in AA Tulsa (I'm conveniently leaving out his 3 run, 1IP debut in AA), it was anyone's guess what we'd see in the majors, but there was little doubt that it'd be awesome.

Well, it was something.

White went 6 innings, striking out 4, walking 1, and inducing 9 groundouts to a mere 2 flyouts. He had his crazy groundball inducing pitches working on both sides of the plate. His delivery looked good, and between Muzia and myself, it's gonna be fun watching this guy's career with the Rockies.

Oh, I guess I'm leaving some stuff out here.

Along with the 2HR he allowed, White allowed another 5 hits, 4 of which came in an absolute comedy of a 3rd inning.

To lead off the inning, White induced a 6-3 groundout of catcher Humberto Quintero. 1 down. He then gave up a line drive double to pitcher Bud Norris, followed by a line drive single to Jordan Schafer, who subsequently stole 2B.

What happened next  was just absurd. Jose Altuve singled on a grounder to Troy Tulowitzki, called safe on what was deemed a late throw. Garbage. That scored Norris. JD Martinez then grounded one right back to White, who accidentally deflected it while trying to make a play on it. Schafer scores. Carlos Lee then grounded one right to 3B Chris Nelson, who botched the play, loading the bases for Brian Bogusevic. Luckily, he grounded to a questionable infielder who can at least field well, Herrera, who turned the 4-6-3 double play.

Other crazy things: Seth Smith hit a 9000 foot homer that bounced off the front of the 3rd deck above the opponent bullpen. Yeah. Crushed that damn thing.

Jonathan Herrera also hit a home run. Yeah. That one.

Todd Helton had a hat trick.

Iannetta hit a frozen rope to center - AGAIN - but Jordan Schafer made a much better read on it than did Mike Cameron.

In the bottom of the 8th inning, Houston brought in LHP Wesley Wright to face Carlos Gonzalez. He succeeded in getting Cargo to pop out to the catcher in foul territory.

The Astros then brought in David Carpenter, a righty, to pitch to Tulowtizki. Tulowitzki grounded out to Clint Barmes (we found it somewhat poetic).

With Tulo down, the Astros brought in a lefty to face Helton and Smith, LHP Wesley Wright.

The Astros, when they pulled Wright initially, didn't actually PULL him. They instead pulled RF Bogusevic and moved Wright to Right. After Carpenter got Tulo out, they brought in J. B. Shuck to play RF and put Wesley Wright back on the mound. 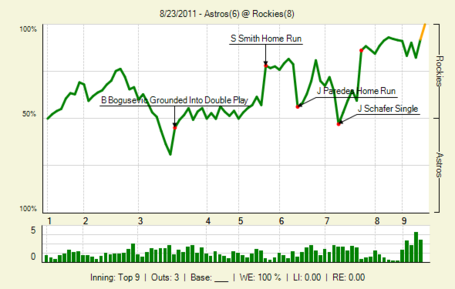