Troy Tulowitzki scored the winning run on a bases loaded wild pitch in the tenth inning as the Rockies walked off with a 7-6 victory and three game sweep of the Astros on Wednesday. Tulowitzki and Carlos Gonzalez both hit two run home runs off of Wandy Rodriguez. The core of the Rockies is alive and well. The man the Rockies would like to trade for, Houston's Rodriguez, perhaps not so much as he wilted under the glare of trade rumors and distractions.

Dexter Fowler had two extra base hits off Rodriguez, a double and a triple. If Fowler finishes the season without a home run, he's already ahead of Juan Pierre's 21st century record (set in 2007) of exclusive 2B and 3B extra base hits in a season (Fowler's currently at 37, Pierre had 32.) Fowler would need 20 more doubles and triples to match Nap Lajoie's MLB mark of 57, set in 1906, which would take a lot of doing, but Ozzie Smith's high mark of 44 XBH's without a HR in 1987, or even Dave Cash's 49 in 1977 might be within Fowler's reach at this point. Those represent the most since the start of the early expansion era.

The walk-off wild pitch itself was thrown by Aneury Rodriguez, and today marked the first time Rodriguez and Jason Hammel both pitched in the same MLB game, both in relief. The Rockies traded then prospect Rodriguez to the Rays for Hammel prior to the 2009 season.

A little Gen-R trivia too. The first time Aaron Cook and Clint Barmes both appeared in the same game was nearly eight years ago on September 6, 2003. Barmes went three for three and Cook got two fly outs in mop-up relief of Darren Oliver. This is the first time the two long time teammates faced each other as opponents, and Barmes got the better of Cook with a home run and two hits today. Cook was a bit ineffective all around this afternoon, but Hammel and the rest of the Rockies bullpen did an admirable job bailing him out, with five innings of scoreless relief. 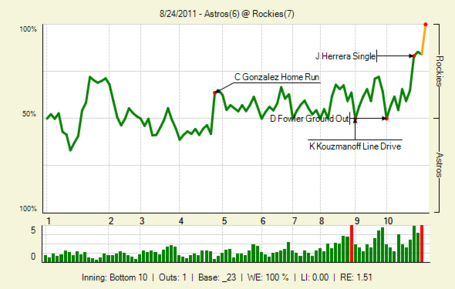