I'm having trouble finding the words to describe the kind of hosing the Rockies took during the 7th inning of this game. Clinging to a 1-0 lead, Esmil Rogers walked Andre Ethier on what appeared to be a 2-2 count. Don't ask me how THAT works, but apparently balls are strikes. Here's evidence piece number one:

After that, Aaron Miles walks on a full count - which looked far more legitimate.

After that, Rod Barajas singled through the hole on the left side to load the bases with nobody out. Jamey Carroll flew out to CF, and Dexter Fowler made a fantastic throw to catcher Eliezer Alfonzo to get Andre Ethier at the plate. 2 down.

With runners at 2nd and 3rd, Rogers gave PH Tony Gwynn the ol' intentional BB, set up all them force plays. 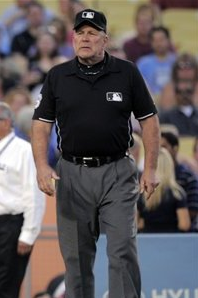 So a balk drives in the tying run. After that, a single drove in another 2 runs.

Jim Tracy goes to the pen and brings in Matt Reynolds.

Within a pitch or two, Reynolds had Sellers picked off at 1B.

Wait, what? The inning still isn't over? But why?

At this point, Jim Tracy was ejected. As well he should be in a point like this, because if he wasn't throwing a big enough fit after the debacle we'd just watched... well, I'd just have to add that to the list. The worst part is that home plate umpire Hunter Wendelstedt warned Tracy not to come out of the dugout. Look, that just isn't acceptable. If there's been a lot of questionable calls in that inning, and any manager has the right to come see what the hell was going on.

After getting ejected, James Loney put up a 2-run homer and Matt Kemp added his 30th of the season (making his 30-30 season a reality). 6-1 Dodgers at this point.

The crazy part was listening to this inning on the way home from dinner. We'd been watching at a particular watering hole up in Golden, and decided it was time to head home. After the single to center field by Justin Sellers, Jack Corrigan simply went off on Bob Davidson, questioning his viability as an MLB umpire among other incredibly frustrated comments. As soon as Wendelstedt called the balk on Reynolds (for apparently... touching his leg?), Corrigan again burst out with claims that the rest of the staff was covering for Blusterin' Balkin' Bob Davidson.

I don't even know what to say anymore. After a similar instance of absurdity from Davidson in a Cubs-Pirates game, Baseball Nation Editor Al Yellon called for a crackdown on rogue umpires. I can't agree with him more. No, umpiring isn't easy. Neither is pimpin'. But that doesn't give them license to suddenly insert themself as central figures into the tight innings of the game. Most umpires aren't bad about this. Davidson is, and needs to be removed from the game of baseball.

The Dodgers might have taken that lead away from the Rockies even if the umpiring staff HADN'T extended the inning as atrociously as they did. But the Rockies' pen might have held the lead just as readily. 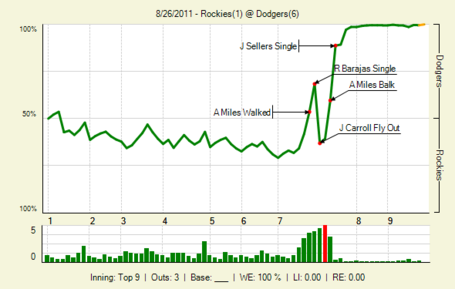