Tulowitzki and Gonzalez continue to mash, but Rockies fall to Dodgers anyway

Share All sharing options for: Tulowitzki and Gonzalez continue to mash, but Rockies fall to Dodgers anyway

Two two run home runs by Troy Tulowitzki and a pair of RBI singles by Carlos Gonzalez weren't enough for the Rockies to overcome the Dodgers on Saturday afternoon/evening as the Dodgers won 7-6 in eleven innings. Matt Kemp launched a game winning walk-off solo shot off Jason Hammel, two innings before, Rafael Betancourt gave up a game tying solo HR to James Loney.

Kevin Millwood had a solid start for the Rockies, before running into trouble in a five run sixth inning, that was aided by errors from Chris Iannetta and Kevin Kouzmanoff. Gonzalez finished with four singles. With the loss, the Dodgers and Rockies are now tied for third in the NL West, with tomorrow's series finale deciding who stays there. 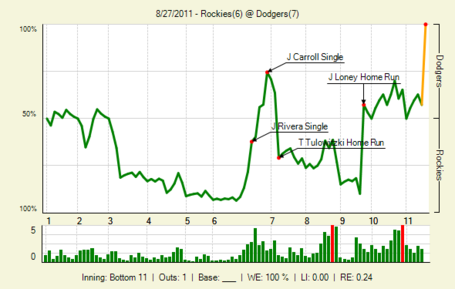