Rockies Pile on Early, Hang on Late to Beat the Dodgers 7-6

Share All sharing options for: Rockies Pile on Early, Hang on Late to Beat the Dodgers 7-6

It looks like the Rockies, having had a 17 game Sunday losing streak, are going to give a long Sunday winning streak a try. I for one welcome these efforts. If this afternoon's game felt like a repeat of yesterday's to you, where the Rockies took a big lead and crumbled, you aren't alone. Happily, this game had a better ending.

The Rockies started the game out with a bang, scoring five runs in the top of the first inning, including a bases-clearing double by new Rockie Kevin Kouzmanoff. After LA pulled to within 5-2, Seth Smith and Kouzmanoff provided RBI hits in the 5th to make it 7-2. Then everything seemed to be coming undone, as Jhoulys Chacin walked the bases loaded and allowed two runs on no hits in the 6th and Matt Lindstrom allowed two more runs to cross in the seventh to make it 7-6.

Fortunately, the bullpen was able to hold the one run advantage this time and the Rockies were able to knot up the season series at 9 with LA. Carlos Gonzalez's RBI streak ended at 11, but he did provide 3 hits to extend his hit streak to 15, while Smith and Kouzmanoff each had multi-hit games. Meanwhile, Chacin got the win despite his wildness (11-10), striking out 6 in 5 plus innings, and Rafael Betancourt set down the Dodgers in order in the 9th to record his 4th save. Colorado now heads to Arizona to see if they are going to make any noise in September. Anything less than a sweep there and I'd say the playoff dreams can probably die. 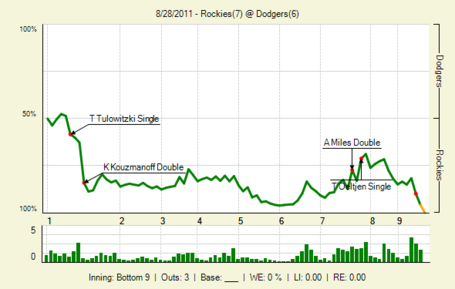