In his second start in a Rockies uniform, Alex White failed to build on the positives from his first outing as he walked six batters in six innings, while also allowing five runs on seven hits. Definitely not the birthday that the 23-year-old righty had in mind as his team dropped a 5-1 decision to the Arizona Diamondbacks, who have now won seven straight for the second time this month.

Things started off poorly for White, who allowed a lead-off home run to Ryan Roberts. He went on to walk the bases loaded in that first inning, but was able to limit the damage by picking off Aaron Hill and eventually striking out Chris Young to end the threat. White would settle down nicely, keeping the D-Backs at bay through the fifth inning despite working around just a little bit of traffic. However, the plane came crashing down in the sixth inning when White allowed four runs on five hits, a hit-by-pitch, and an intentional walk. That put Arizona up 5-0, and they would never look back.

Carlos Gonzalez and Troy Tulowitzki, who had been basically unstoppable over the past couple of weeks, combined to go 0-for-5 (though they did collectively reach base three times via walk/hit-by-pitch). In fact, the Rockies only had four hits period, and all of them were singles. Not exactly an inspiring effort from the offense tonight. Daniel Hudson deserves some credit though, as he struck out eight against just three walks and three hits in seven scoreless innings.

The Rox were able to muster up a measly run, but only because D-Backs pitchers beaned their way to a bases-loaded, one-out situation in which they beaned Chris Iannetta to plate Colorado's lone run. Jason Giambi (pinch-hit K) and Dexter Fowler (first-pitch lazy flyball) ensured that the guys in purple went away meekly from there.

Tonight's loss was rough, as the Rockies really needed to win out against the two teams ahead of them. That was a ton to ask for, I know, but it is what it is, and the Rox were unable to do it.

Bring on the September callups!

The usual after the jump... 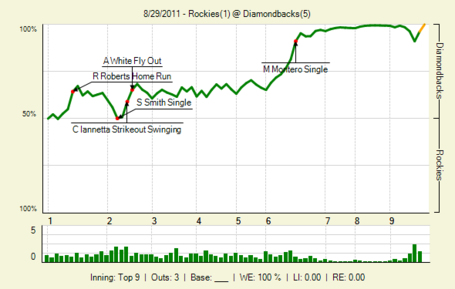