Jason Hammel put the Rockies behind the eight ball against Roy Halladay early, allowing five runs in the first two innings. However, the offense showed some fight against the Phillies ace, just not enough to pull out a victory. Todd Helton hit a home run and went two for four and had three RBI. Dexter Fowler tripled, walked, stole a base and scored half of the Rockies runs.

For the Phillies, Ryan Howard committed a pair of errors that contributed to the Rockies first two runs on a Fowler grounder, but he also led them at the plate with a home run and four RBI. 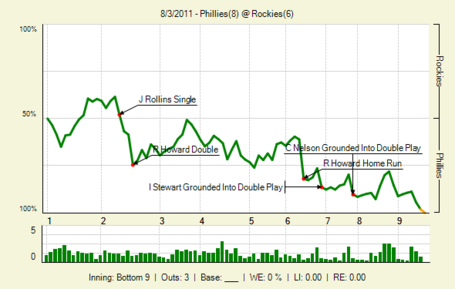