Aaron Cook actually had good stuff tonight.  No really.  There was significant sink on his sinker and he was locating well on the first base side of home plate.  In fact, he struck out six men, his highest output since punching out eight Padres at PetCo Park on July 16....2009.  Unfortunately, it didn't stick around all game, and neither did his defense.

Dexter Fowler misplayed a sinking line drive in the left-center gap into a two-run triple by Gerardo Parra, who would then score on a groundout to turn a 1-0 lead into a 3-1 deficit.  After an RBI single by Chris Iannetta to cut the lead to 3-2 in the 4th, Cook sent Rockies fans to the bottom of their fifths in the...bottom of the fifth.

Cook hit easy out Willie Bloomquist to lead off the inning.  After a Parra single, Miguel Montero unloaded a 3-run home run to right, his first home run since a 5 RBI performance July 23....against the Rockies.

The Rockies managed 13 hits on the night offensively, but all 12 came from three guys.  Chris Iannetta, Todd Helton, Carlos Gonzalez and Todd Helton each had three hits, with the only extra base hits coming on doubles from Helton and CarGo.

Dexter Fowler crushed an opposite field home run off David Hernandez in the ninth, his first home run of the season and Hernandez' second allowed of the year.  Troy Tulowitzki struck out twice for the third time in five games - he also popped out, fouled out and grounded out to short and now has 4 hits in 35 plate appearances at Chase Field this season and is 6-for-52 vs Arizona pitching.

The Diamondbacks have clinched the season series against Colorado with four games to play and have won eight straight, threatening to take a 6 game lead in the division.  Meanwhile, the Rockies are in 4th place and 13 games behind in NL West leader for the first time since Jim Tracy's 12th game in Colorado, on June 9, 2009. 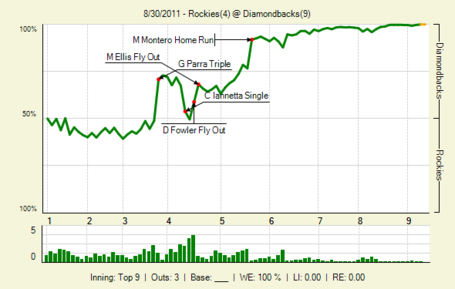