Share All sharing options for: Rockies 6, Nationals 3: Pitching AND Offense? What's the catch...?

It took 13 batters before the Rockies got a hit off Ross Detwiler, but the slow progress of the offense was covered by solid pitching from starter Esmil Rogers and the bullpen sans one, allowing the Rockies a win by the time nine innings were through.

Things started of shakily as Rogers allowed Michael Morse to single in Rick Ankiel. This would be the only run production from the Nationals in the game, as Rogers found his form. He did deal with traffic, allowing seven hits and walking two over his five and two thirds innings pitched, but other than a sharp double off the bat of Ryan Zimmerman in the fourth inning (powerful enough to snap an out-of-town scoreboard tile), the hits were light.

After Troy Tulowitzki broke up the no-hitter in the bottom of the fourth inning, Todd Helton (who had walked earlier in the inning) came around to scored on a Ty Wigginton single. Chris Nelson followed with another base hit, but Tulowitzki was thrown out trying to score on the play.

The Rockies would score one more run in each of the next two innings. In the fifth, Chris Iannetta hit his 13th double of the year, scoring off the bat of Eric Young Jr. In the sixth, Tulowitzki homered off of Washington reliever Collin Balester to increase the lead to two. The offense did most of its damage in the eighth against former Rockies draftee Ryan Mattheus. After loading the bases with two walks (one intentional to Wigginton) and a Tulowitzki double, Nelson singled in Helton for the Rockies fourth run, Iannetta was hit by a pitch, scoring Tulowitzki for the fifth and Eric Young Jr. walked to score Wigginton for run #6.

Matt Reynolds, Matt Lindstrom and Rafael Betancourt were all effective in relief before the lead was blown open. Despite the five run lead, an already warmed up Huston Street threw the ninth. Brian Bixler and Ankiel came around to score on a Zimmerman double, but the lead was padded enough to protect beyond that. Rogers (5-1) took the win. 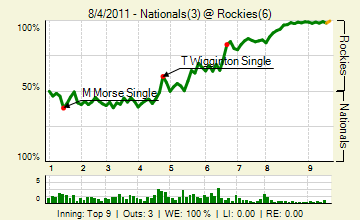