Juan Nicasio was hit with a comebacker in the 2nd inning off of the bat of Ian Desmond. Desmond took an 0-1 pitch directly back up the middle and straight into the side of Nicasio's head. Nicasio immediately fell to his knees and then rolled over on his back. Keith Dugger and other training staff rushed out to the mound, immobilized Nicasio and took him out of the park on a stretcher. Word is that he is resting comfortably in the hospital. The team was called into a closed door meeting directly after the game.

Troy Tulowitzki is addressing the media. He's not saying what Nicasio's condition is, but he's asking the media to skip the postgame interview and leave the rest of the team alone so they can just worry about Nicasio.

No announcement yet is pretty scary.

Jim Tracy was visibly upset about Nicasio's injury. When asked how the scene looked directly after, Tracy said it was bad, and then declined to talk about it any longer by leaving the press area.

Game things after the jump.

Despite 15 baserunners over the course of the night, the Rockies failed to convert more than 3 of them on the night.

Aside from Nicasio's injury, this was a pretty unremarkable game. Shame the Rockies lost, but it's understandable that they'd be distracted after an evening like this. 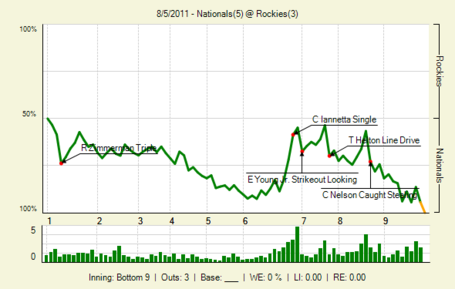