Rockies bats roll over Livan Hernandez, much ground gets covered.

Share All sharing options for: Rockies bats roll over Livan Hernandez, much ground gets covered.

Carlos Gonzalez's return has been a boon to the Colorado Rockies lineup, and Livan Hernandez proved to be a salve for what's been ailing the Colorado offense, as the Rockies matched their season high for runs scored and rapped out 19 hits in beating the Nationals 15-7 on Saturday night. Gonzalez, batting third, had two hits and scored two runs, and showed once again that his presence tends to stabilize the rest of the offense to be able to do good things.

Chris Iannetta and Ty Wigginton each hit home runs. Iannetta had four hits in all and scored three times while Troy Tulowitzki also had three hits, including two doubles and drove in three of the Rockies runs. Added to Friday night's three hits, Iannetta now has seven in his last nine at bats and is on a six game hitting streak that's seen his batting average rise from .220 to .245. He's been hitting .478 during the streak.

Jhoulys Chacin continued his inconsistent, walk prone ways of late, and while he did walk the tightrope somewhat well okay tonight, allowing just three runs on five hits and five walks in five innings of work, he shows that there's still some adjustment and maturation that needs to take place before he can lead the Rockies rotation. Greg Reynolds had a rough inning of relief following Chacin, allowing the Nationals other four runs, but Matt Belisle, Rafael Betancourt and Rex Brothers stopped the bleeding after that to allow the Rockies to run away with the game. 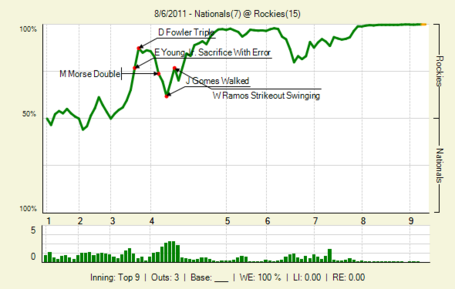