It really is incomprehensible at this point.  Sixteen consecutive Sundays.  It hasn't just been the Aaron Cook vs. Justin Verlander type match-ups.  The Rockies have managed to be an absentee team on the day of rest in Ubaldo Jimenez vs. Micah Owings games, Jhoulys Chacin vs. Kyle Lohse ballots.

It is the Curse of Alan Johnson.  Ever since the Rockies won on April 17 in Johnson's lone MLB start (thanks to a nine-run output) to jump out to a 12-3 record, Colorado has dropped every Sunday game in going 40-59.

For some reason in all of this, the Rockies are on schedule to lose on ESPN Sunday Night Baseball in St Louis on the 14th of August.  When they do, they will clinch four full months without a win on Sunday.

Aaron Cook was actually quite solid today, pitching into the seventh and allowing just two runs, both coming on a 2-run home run by recently acquired outfielder Jonny Gomes.  The Rockies rallied in the seventh against former farmhand Ryan Mattheus, with runs scoring on an error off the bat of Carlos Gonzalez and a 2-out single by Ty Wigginton.

A leadoff double in the eighth off Matt Belisle proved to be the winning runner after Jayson Werth singled him home.

Troy Tulowitzki continued to hit well when the game is not on the line.  He singled in his first two at-bats, but then subsequently struck out in his final three trips to the plate, marking just his second 3-K game of the season.  He struck out with a runner on and two outs in the fifth, runners at the corners with one out in the seventh, and he struck out looking to end the game. 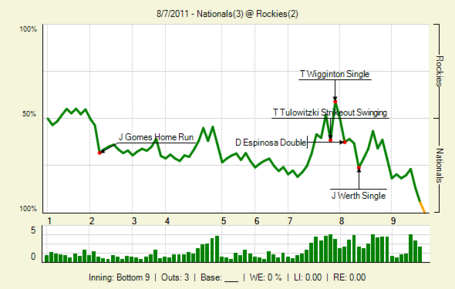