Behind two-run bombs from Seth Smith (twice), Todd Helton, and Carlos Gonzalez, the Rockies pounded their way to a 10-7 win over the Cincinnati Reds at Great American Ballpark.

Colorado starter Jason Hammel got off to a rough start, as he walked two of the Reds' first three batters in the opening frame, then allowed a three-run homer to Jay Bruce. However, Seth Smith picked up his teammate in the second inning by depositing a Homer Bailey center-cut fastball into the fourth row in the right field seats to cut the deficit to 3-2. In the following inning, Todd Helton singled in Mark Ellis to tie the game. A couple of batters later, Smith hit another ball just a couple of rows deeper to give his club a 5-3 lead.

The rain came following the top half of the third, causing a long delay and some worry about whether or not the game would be washed out. However, the storm passed and, with a shortage of pitchers, Jim Tracy elected to send Hammel back out for the bottom of the inning. Jason immediately got himself into more trouble, as he allowed a leadoff double to Edgar Renteria. Jay Bruce would drive him in two batters later on a single, and Drew Stubbs plated Bruce on a two-out, two-run homer shortly thereafter to reclaim the lead for the Reds.

Hammel would pitch a clean fourth inning before exiting, and the Rockies' bats would pick him up once again as Troy Tulowitzki led off the fifth with a single, and in the next at-bat Todd Helton would hit the Rockies' third two-run homer of the game, giving the Rockies a 7-6 lead.

The game would stay that way until the bottom of the seventh inning, when Brandon Phillips pinch-hit for Jose Arredondo and immediately smacked a homer into the left-field seats off of the suddenly very hittable Rex Brothers to tie the game at seven. Luckily for Brothers and the Rockies, the bats had one more rally left in them, as Dexter Fowler started the top of the eighth with a single off of Bill Bray. After Ellis popped out trying to bunt Fowler to second, Carlos Gonzalez absolutely unloaded on a Bill Bray offering (seriously, watch the video) and sent it 439 feet for an impressive left-on-left home run. More importantly, he gave the Rox a 9-7 lead and the bullpen was finally able to keep the Cincinnati offense at bay, as Rafael Betancourt and Huston Street dominated the eighth and ninth innings.

The usual stuff is after the jump... 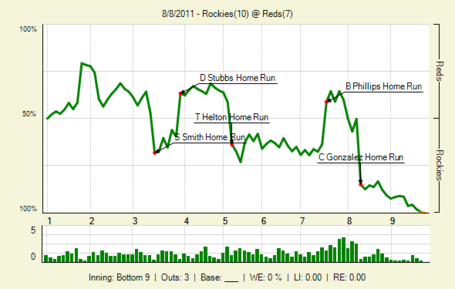