A lot of Rockies fans are silently harboring pipe dreams that 2007 makes a re-appearance this season.  It would take about that kind of magic to bring playoff baseball back to Denver this October.  Good news for those Rockies fans:  2007 has made a re-appearance.  Bad news:  you should have been more specific in your prayers to the baseball gods.

Dontrelle Willis has been a disaster since he left the Marlins for the Tigers in 2008, never throwing more than 44 IP in any big league season.  The 29-year-old southpaw called upon his Marlins magic tonight, striking out six of the first nine Rockies he faced.  He finished the night going 8.0 IP, the longest he has gone since September 25, 2007.

Willis finished the game with 10 strikeouts, a number he had not matched August 14, 2007 against the Diamondbacks. Back when "Rocktober" was only spoken by radio DJs in October.  Back when Justin Upton, who struck out four times that day, was still a teenager.

And yet, he wasn't quite good enough to beat the Rockies.  Esmil Rogers earned his sixth win of the season by battling significant control problems early.  Rogers soldiered through six innings, allowing just two runs.  One scored on a triple by the pitcher Willis.  The other resulted from a strikeout/wild pitch, single and comebacker fielder's choice, in which the runner Todd Frazier scored from second base.

In all, the Reds managed eleven base-runners against Rogers in six innings, who threw just 66 of 111 pitches for strikes.

While the Rockies struggled with Willis, they actually were very good with runners in scoring position, going 2-for-4 on the night.  Dexter Fowler singled with the bases loaded in the fifth with two outs to give Colorado a 3-2 lead, and Troy Tulowitzki fired a two-out two-run laser over the left field wall for his tenth road home run on the season.

Todd Helton struck out three times against Willis, and once against Aroldis Chapman, just the second time Helton has had the golden sombrero in his career.

Josh Roenicke has come out of nowhere to become a bullpen savior.  Taken from the minor league scrap heap in early June, the right-hander has joined the bullpen and pitched three consecutive days.  The right-hander allowed a weak single and struck out two in operating as the setup man for a bullpen with three arms unavailable.  Could he follow Matt Belisle as a former Reds prospect to find a home in the Rockies pen?

With the win, the Rockies clinched a tie at worst in the road series in Cincinnati.  With a win tomorrow or Thursday, they can avoid being the victim of Dusty Baker's 300th career win with the Reds. 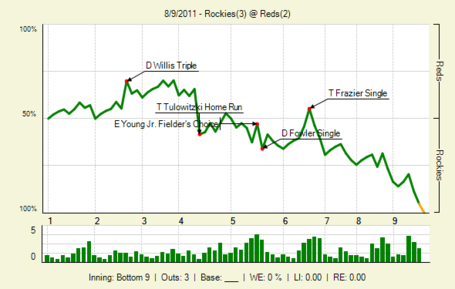