Share All sharing options for: Rockies swept in Arizona, lose 4-2

Dexter Fowler homered for the second straight night, but it was the "out" he made before that which may have made this game's outcome inevitable, that or it just might have been the calendar year. The Rockies advance scouting should have done a better job of making it clear to the team that Gerardo Parra's arm shouldn't be tested, but in the first inning, Fowler did on a sac fly attempt and was called out. The next half inning, Miguel Montero's three run home run off Rockies starter Esmil Rogers instead gave the Diamondbacks the early lead and proved all they needed.

Fowler, Seth Smith and Jonathan Herrera each had two hits for the Rockies, and while Rogers settled in after that shaky first to pitch well the rest of his outing, the damage had been done: 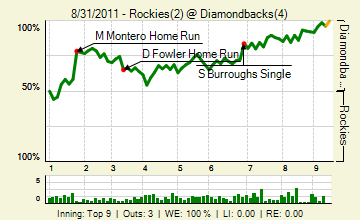