This was a great day to be a Rockies fan -- the weather was beautiful, there was plenty of young talent to survey, and Drew Pomeranz was pretty darn good in a Rockies victory.

Pomeranz, making his big league debut, threw five scoreless innings, allowing only two hits and two walks, also striking out two in getting his first win (1-0). There were a couple of balls that died on the warning track, but I was very impressed by Pomeranz's poise out there. He threw 63 pitches, 36 of which went for strikes.

Jason Hammel picked up where Pomeranz left off, throwing four innings of one run ball in relief to get his first ever save. It was also the MLB debut of SS Thomas Field, who went 0-3 with a walk but also turned two double plays. Offensively, Colorado was led by Ty Wigginton, who was 2-4 and hit a solo shot in the 4th (15) to put the Rockies up 1-0, and Eric Young Jr, who went 2-4 with 3 steals.

Graph: That there is a beautiful graph 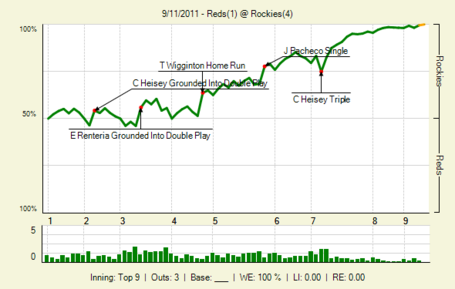