Old actors Ellis, Millwood make it through to callbacks as Rockies split with Brewers

Share All sharing options for: Old actors Ellis, Millwood make it through to callbacks as Rockies split with Brewers

If the last month of the 2011 is an audition for the beginning of the 2012 season, than Kevin Millwood and Mark Ellis can both rest assured that their performances for the Rockies are at least meriting second looks as the Rockies defeated Milwaukee 6-2 on Wednesday to split a two game series. Millwood pitched six innings, allowing just two runs off of four hits to one of the National League's better offensive ballclubs in the Brewers (particularly at their home park.) Ellis collected four hits himself, scored twice, stole a base and drove in one run, and finishes10 for 19 at the plate against Milwaukee in 2011.

While the swan songs of veterans provided the drive for the evening's performance, the 25 and under future of the Rockies franchise saw some promising results as well. Carlos Gonzalez (turns 26 in October) and Wilin Rosario both hit home runs and Dexter Fowler scored twice. Rex Brothers pitched in to the youth effort with two outs of solid set-up work in the eighth inning, including an important one out strikeout of Prince Fielder with runners on first and third. Shortstop Thomas Field collected his first major league hit, but also got caught in his first big league rundown. 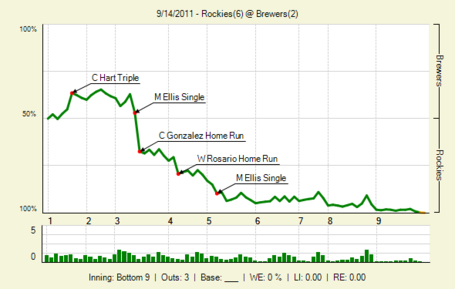