Despite coming to life in the seventh inning, the Rockies had already let the Giants feast upon their dignity for six innings previous, negating any real chance to punch back into the lead.

Jhoulys Chacin allowed significant damage through the first two innings in the form of a two run Pablo Sandoval homer in the first, followed by a second inning that included fielding errors from youngsters Jordan Pacheco and Thomas Field as well as one of two hits Chacin would allow to opposing starter Ryan Vogelsong. The Giants plated another three, giving them an early five to nothing lead. Chacin would allow seven of the San Francisco runs (four of them earned) on nine hits, four walks and only one strikeout.

Chacin, Dexter Fowler and Mark Ellis manufactured a run with a walk and two straight singles in the third with nobody out, but were unable to bring any more around until the fourth, when Pacheco hit his second MLB home run, a solo shot cutting the lead to three.

In another ugly defensive sixth inning that saw a late throw and botched rundown, as well as a possible injury to Carlos Gonzalez upon missing a catch while crashing into the wall, Chacin allowed a triple to Sandoval, completing a cycle for the San Francisco third baseman, a rare occurrence with all four hits coming off of one pitcher in the first two thirds of the game.

Most of the Rockies' offesive production came in the seventh off of rookie reliever Steve Edlefsen. Chris Iannetta began the inning with his 13th home run of the year. Field then singled in, doubled in later by pinch hitter Chris Nelson. Dan Runzler relieved Edlefsen, and Eric Young Jr. would double in Nelson for the final Rockies run of the game.

The Giants put up an insurance run in the top of the ninth off of Matt Reynolds with Brandon Belt's sixth MLB home run. Despite a leadoff single from Field in the bottom of the inning, Santiago Casilla closed the game for his 4th save, and Vogelsong was awarded his 11th win. Jhoulys Chacin falls to 11 and 12.

The Rockies will take on the Giants again tomorrow evening at 6:00 Mountain, tune in if you're feeling brave. Alex White takes on Madison Bumgarner. 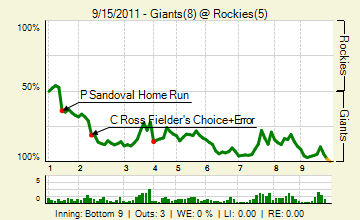