The NL West is a mess this season.  The Padres are racing to 100 losses.  The Rockies are having arguably their most disappointing season ever.  The Diamondbacks more or less clinched a division title with a full month left in the season.  The Dodgers' owners are locked in divorce and bankruptcy and have been seized by MLB.  Welcome to the party, San Francisco.

Less than a year after winning the World Series, the Giants' have announced that Managing General Partner and CEO Bill Neukom, former General Counsel for Microsoft, would be retiring, moving on to Chairman Emeritus status.  The news was shocking.  Neukom loved the Giants, and he had just presided over a championship team.  It makes a little more sense when the retirement appears forced.

Part of the benefits of winning a World Series is a large unplanned influx of revenue.  There are playoff ticket sales and an increase of merchandise sales, but both tend to carry over heavily into the next regular season.  And they did for the Giants.  From Mark Purdy:

Neukom, it is said, believed that this was his money to spend as he saw fit - and he did so, increasing payroll and buying new technology for the baseball department, among other expenditures. Instead, the Executive Committee wanted the money to be put in a "rainy-day fund" for use in leaner times.

Shame on the Chief Executive Officer for thinking he had the right to make executive decisions.  And shame on him for reinvesting money from a championship organization back into the organization.  Other points of contention include the acquisition of Carlos Beltran, Aubrey Huff's contract, and the releases of Miguel Tejada and Aaron Rowand.

I cannot pretend to know Neukom's history or give much of an educated guess on what Neukom's surprising departure and the appointment of Larry Baer as CEO means.  If the near unanimous reaction among Giants bloggers is to believed, the future of the Giants' organization on the field is in more of a dire situation than previously thought.

I share in the sentiment expressed throughout the Bay Area tonight: great surprise over Neukom's departure and deep concern about the commitment of the Giants ownership group to invest in a winning franchise now and in the future.

I'm immediately worried about the Giants long and short term future. With the contracts of Matt Cain and Tim Lincecum coming up soon, you have to wonder if the Giants will do what it takes to retain their homegrown World Championship core or let them walk to the highest bidder...This is a shocking day in Giants history, and sadly I also think it's a dark one. Bill Neukom was a true baseball fan and ran the team like one; he talked about wanting to win, and backed up his talk by spending the money necessary to do so. Larry Baer is a businessman first, and his main concern will be the ownership group's bottom line. The days of putting the success of the baseball team ahead of the size of the ownership group's bank accounts are sadly over.

I don't know if this move is good, bad, or irrelevant, but I have a hunch. The hunch is that the Giants are going to look for profits more than wins now. They'll get the profits. If the wins come too? Gravy. It worked so well for the Niners and Warriors, the idea was bound to take off.

I'm not going to go out on a limb and say that this move makes the Giants' future look completely bleak, or anything that drastic - frankly, I have no idea how the team will be run in the wake of this move. But I don't like it.

Reactions from those who know better vary from franchise armageddon to at best, a step backward.  That leaves the two largest market and longest tenured franchises in the division in a precarious position.  Kudos to Arizona for taking advantage of the situation in 2011.   It looks like 2012 will be just as wide open.

Two weeks' worth of divisional news after the fold

You Should Know:  This week's act in Small Sample Size theater, brought to youby Daniel Strittmatter at the Pit:

News:  The Diamondbacks utilized their purple and teal expansion uniforms last weekend.  Regarded as the prime example of the poor uniform colors of the 90's, soco at AZSnakePit put up a poll asking whether fans prefer the purple/teal or sedona red and sand uniforms. The results might surprise you.

Barry Bloom asked Kirk Gibson what he thought about being considered for the Manager of the Year Award.  Gibson's reaction was unique - he got angry.

"Come on, are you kidding me? That's the last thing on my mind. I'm insulted you would ask me about that." - Kirk Gibson, on being asked about his prospects of winning Manager of the Year.

Gerardo Parra is having a great season.  Strittmatter profiles the young outfielder.

Buster Olney tweeted that the Diamondbacks will definitely call up Jarrod Parker at some point this month, though Trevor Bauer is less likely.

Why no Bauer?  In his last two starts, the 2011 3rd overall pick has allowed 17 runs in 4.2 IP with more walks than strikeouts.  Both starts came at home at AA Mobile, elevation 10 feet.  Is there reason for worry?  Strittmatter pleads with fans not to fret over Bauer.

Injuries:  Xavier Nady still hopes to return before the end of the season from a fractured hand.

You Should Know: 18 teammates have won the Cy Young and MVP in the same season, though all 18 sets came on a team with a winning record.  Matt Kemp leads the NL in fWAR and Kershaw leads the NL in wins, strikeouts and ERA.

News:  Hiroki Kuroda had an MRI yesterday, which checked out fine.  Kuroda will pitch tonight.

An interesting line from Will Carroll danced across twitter Wednesday:

I never thought McCourt would go Charlie Finley on us, but hearing more people say the Dodgers sale ... won't be the team.

So how much for Matt Kemp?

Andre Ethier may have played his final game in Dodger blue.  Ethier had season-ending surgery on his knee.

Clayton Kershaw was immediately ejected Wednesday after hitting Gerardo Parra with a pitch.  Kershaw was throwing a one-hit shutout at the time.  Both teams were apparently warned before the game, but Don Mattingly didn't take it as a warning.  Eric Stephen has the scoop on everything, but Kershaw might be facing a suspension.

While a suspension to Kershaw might hurt, history might still need to be broken to keep the Cy Young from the southpaw.  Kershaw currently leads all 3 pitching triple crown categories - ERA (by 0.01 over Johnny Cueto), strikeouts (by 25 over Roy Halladay) and wins (tied with Ian Kennedy).  Kershaw's K totals are likely safe already, so it's possible Kershaw could win the Triple Crown without pitching another inning.  That's significant - of the eight pitchers to win the Triple Crown, all eight won the Cy Young.

Roy Halladay does lead Kershaw in both rWAR and fWAR by about 1.25, and in this age where WAR is more commonly cited than ever before, a Triple Crown isn't a clincher for Kershaw.  Beyond that, Kershaw has made 7starts against the horrid offenses of the Padres and Giants, beefing up his stats with 7 ER and 51 K in 52.2 IP.

The Dodgers have allowed 4 home runs to pitchers this season, the most they have allowed since 5 hurlers took them deep in 2005.

Jonathan Broxton's bid to return from injury has come up short.  The Dodgers announced Monday that Broxton won't return this season.

The Dodgers are holding Star Wars Night tonight, one of 13 teams to do so this September.  As Colin Wyers pointed out, 12 of the 13 teams are offering a special ticket package to Stand Up to cancer.  The Dodgers are not.

You Should Know: The Padres are limping into the offseason, but racing to the top of the 2012 draft order.  By losing 17 of 20, San Diego has leapt into the top five, which Minnesota's #2 spot just three games away.  This is possible despite a -31 run differential, which is comparable to the White Sox, who are two games below .500.

Divisional Change:  Fell three games further back in the division.

News:  The Padres officially filed a protest of a walk-off walk against Arizona last week.  It seems rather weak even before you know the reason:  that Miguel Montero, who was on second base, did not touch third base.  The Padres withdrew.

It probably isn't surprising that the 2011 Padres offense yielded the third longest hitless streak in franchise history.  It might surprise you to find out it was accomplished by Orlando Hudson.

Bill Center of the San Diego Union-Tribune had a online chat with fans.  In it, he discusses a Cameron Maybin extension, Bud Black's job and that Jesus Guzman has gotten interest from AL teams.

Injuries:  3B Chase Headley should return this weekend from a fractured finger. OF Brad Hawpe, RHP Dustin Moseley, IF Logan Forsythe and LHP Clayton Richard have been ruled out for the rest of the year.

News:  Bruce Bochy acknowledged that Pablo Sandoval has regained some of the 40 pounds he lost in the offseason.  A side-by-side photo is enough evidence for me.  It hasn't affected his performance yet though.

Jeff Sullivan wrote this week that Tim Lincecum's down season is quite impressive considering his large down-turn in first-pitch strikes.

Giants Nirvana devoted a post to just how dominating Serigo Romo's 2011 has been.  Speaking of Romo, he had a strange schizophrenic tweet last Sunday.

As mentioned by Brooks Knudsen, Carlos Beltran was positively indifferent during a Giants walk-off win (see 0:55)....Perhaps he's not enjoying his time there.  Beltran recently strongly hinted that he will not re-sign with San Francisco unless they make upgrades to the offense, a proposition made less likely by the dismissal/retirement of Bill Neukom.

Former Rockie Jeremy Affeldt is the Giants' representative up for the Roberto Clemente award.  This confirms clumsiness is not on the grading rubric.

Craig Robinson (aka FlipFlopFlyball) knows how to fan the flames of a rivalry.  He re-created the Dodgers' and Giants' logos if that switched cities when they moved to California: 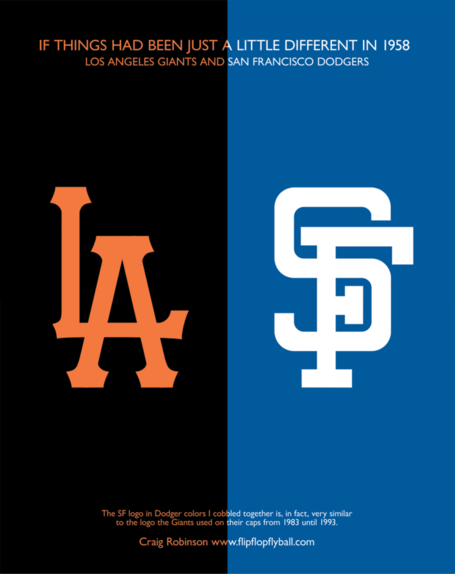 Transactions:   None.
Injuries:  Activated LHP Barry Zito from the 15-day DL (9/11).  OF Nate Schierholtz will get his walking boot off today and will see game action before the end of the season.   LHP Jonathan Sanchez may still miss the rest of the season with a sprained ankle.  RHP Brian Wilson faced live hitters on Monday.