Share All sharing options for: Giants 9, Rockies 1: Baseball is a Cruel, Cruel Game

Nothing quite says 2011 like the Rockies tallying 9 hits and a walk, and yet managing only a single run. The irony of this situation is that Wilin Rosario walked to lead off the 5th, advanced to 2B on a Thomas Field single. Alex White sacrificed Rosario and Field forward a base, and a fielding error by the MLB UZR leader at 3B, Pablo Sandoval, allowed Rosario to cross the plate.

And that was all.

It's just not 2011 without watching Alex White give up yet another home run. I suppose the upside of this start is that he only allowed 1 of them. Oh wait, just kidding. Cody Ross won't let you down easy. Cody Ross is a cruel man who hates Colorado fans, hates Green Chili, hates omelettes, hates the New Belgium Brewery, hates mountains, and hates the Red Rocks Amphitheater.

Really, this season just needs to end. Alex White needs to go do some sort of remedial program where he suddenly rediscovers how to keep those fly balls in the park and doesn't walk a bunch of people. Or even better, how about a start where we aren't making excuses like "well that pitch was taken right off of his shoetops" or "he's missing just barely outside" or "Cody Ross hates the Yonder Mountain String Band"?

It's just frustrating. I never want baseball to end, but I really don't want this season to keep going. Too many wasted opportunities, too many injuries, too many disappointments. Too many games like tonight.

Whatever, it's over. Tomorrow's another day, and very special day at that: It's Drew Pomeranz day.

Also, a very special Thank You to PetroCW and SDCat09 for putting up game threads while I was at my office buried under a server rack plugging servers into a new UPS system. Also to RdRnnr for texting me and telling me that I forgot to put up the stupid game thread. 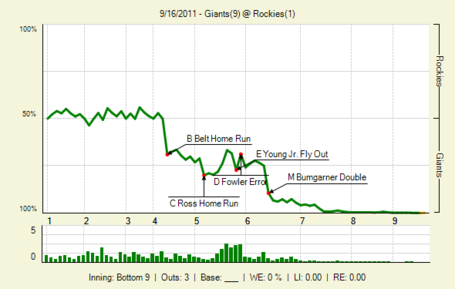