And once again, when a big dog in the NL West barks, the Rockies tuck their tails between their legs and whimper away. Tonight saw another loss to the Giants that would have been demoralizing to me as a Rockies fan had there been any moralizing left in the tank for 2011. Alas, that ran out weeks ago, so when Huston Street allowed a four run comeback by the Giants in the eighth inning (aided by throwing errors from himself and Matt Lindstrom) there was no pain left to feel. Actually, that gives me some satisfaction, knowing that the Giants won't have the pleasure of tasting my sweet sweet tears this season.

Anyway, as far as encouragement for getting our hopes back up for 2012, Drew Pomeranz pitched very well, going five and two thirds innings allowing two runs on four hits and two walks. He struck out five. Hector Gomez went two for four in his MLB debut (but, much like the shortstop he's filling in for, he did come up empty with the tying run in scoring position in the bottom of the ninth.) Dexter Fowler continued his second half on-base spree with the Rockies most productive game at the plate: a hit, three walks. a stolen base, two RBI and a run scored. The two runs batted in gave the Rockies a three to two advantage that held into the eighth, when Street's meltdown led to the collapse and final 6-5 score in favor of San Francisco.

The Rockies did rally for two in the ninth, as Seth Smith singled, Ty Wigginton walked and Mark Ellis doubled to put the tying run at second with one out, but an RBI groundout by Wilin Rosario followed by a K for Gomez ended that last threat. 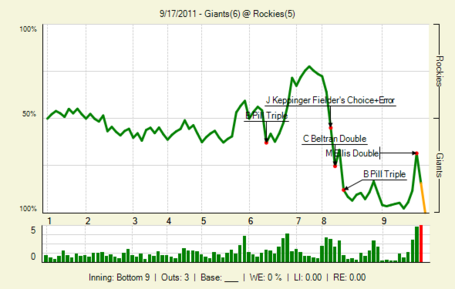