Looks like I made a good decision in going to the Broncos game instead of watching this train wreck. The Giants hit six homers in the game and had nine extra base hits -- all in the first six innings -- to complete the four game sweep over the hapless Rockies. Four of those homers and eight runs came in the fourth inning, including two long balls by Pablo Sandoval. Oh by the way, the Giants have scored by far the fewest runs in the NL this season. With the loss, Colorado officially clinched a losing season.

In what I sincerely hope will be his final major league start, Esmil Rogers was terrible. I mean, of the seven hits he allowed over 3.2 IP, the first six went for extra bases and four were home runs -- including a ball tatered to dead center by pitcher Matt Cain. He allowed nine runs in the 3.2 IP, raising his ERA to 6.64 and his WHIP to 1.83 in 78.2 IP. Greg Reynolds came on in relief and promptly allowed a Sandoval three run shot.

Offensively, both Ty Wigginton (of course) and Seth Smith had multi-hit games, but there was little that they could do after the disastrous fourth inning.

If this is what 2012 looks like, count me out. I hope that Dan O'Dowd and company just allow Jason Hammel (who threw two good innings of relief) and Kevin Millwood to provide slightly below average production from the back of the rotation rather than running out this dreck. 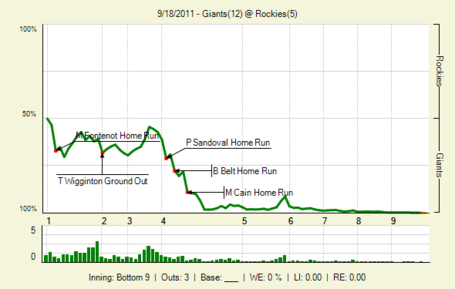 We Are Disappointed In: Rogers (-.364 WPA), everyone else