As usual, it was a terribly-exciting night at Coors Field. What else would anyone expect? However, what we didn't know at the time is that major league history would be made in front of 27,450 rabid baseball fans.

Sources close to both teams have indicated that, for the first known time in MLB history, neither manager filled out a lineup prior to the start of a scheduled regular season ballgame. Instead, managers Jim Tracy (Rockies) and Bud Black (Padres) allowed the first nine people who wanted to play to take the field at the position of their choice, and from there, let the players decide who hit where in the lineup. The results were disastrous for Colorado, as Cory Luebke, who was only recently allowed to leave San Diego's pitcher manufacturing plant in Temecula, CA, held the Rockies to just one hit in seven innings. Meanwhile his team destroyed Colorado ace (haaaagh) Kevin Millwood to the tune of seven runs on nine hits in 3.1 innings.

San Diego outfielder Aaron Cunningham, who is believed to have been rescued from the never-ending depths of Oakland's foul territory by Padres GM Jed Hoyer, hit an 800-foot home run off of Millwood to give his team a 5-0 lead. Not long thereafter, Cameron Maybin, who was acquired from Florida before the season in exchange for players who were actually made up by Hoyer, hit a two-run shot of his own to extend the lead to 7-0, effectively chasing Millwood in the process.

Mark Ellis committed a cardinal sin by swinging at a 3-0 pitch (according to MLB Network's Harold Reynolds, at least, although many sources have confirmed that the count was actually 3-1) and depositing it into the centerfield bleachers to break up Luebke's no-hit bid, and the shutout as well.

The Rockies, who have officially clinched a losing season at home this season, struck out 34 times and gave up seven hits to the opposing pitcher in the game. /2011'd.

Stuff is included after the jump... 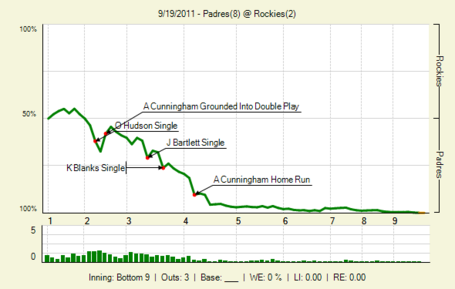 Congrats to SDCat09, who somehow managed to make centurion despite the fact that nobody even posted in the game thread.

*If you would like to read a recap of the game that actually includes real stats, click here.

Some people are pitching tomorrow. No word on whether or not Tracy and Black will actually write lineups for tomorrow's game. Should be exciting either way because it's Coors Field, right?