Game #155 Wrap: The Aaron Cook Saga Ends With a Fizzle

Share All sharing options for: Game #155 Wrap: The Aaron Cook Saga Ends With a Fizzle

It all moved kind of fast. 5 innings, 78 pitches, and it was over. No fanfare, no ovation, nothing. One minute he was there, the next, a lefty was throwing.

Aaron Cook was confusing, to say the least, in what might likely be his final appearance in a Colorado Rockies uniform. His first inning looked like more of what we've seen from Cook this season than any other. The Padres batted around in the 1st on 4 hits, 2 walks, and 2 sacrifice flies. The inning ended with pitcher Anthony Bass striking out swinging.

After that, Cook turned on the angry.

The next 4 innings, Cook struck out 7 batters, walked none, and allowed only 2 more hits. He looked to be making up for time lost, what with the strikeouts and all.

Then he was pulled.

I'm absolutely baffled as to WHY Tracy decided to pull Cook when he did. He was replaced after 78 pitches in between innings for lefty Matt Reynolds. Cook threw 8 pitches in the 5th, getting 2 groundouts and a swinging strikeout of Chase Headley. He looked to be poised to finish the 6th, maybe even run through the 7th; it would've been a fine way to make up for that nasty 1st inning.

Instead, he was pulled between innings with no notice and seemingly no reason. I don't meant to bring torches and pitchforks to manager Jim Tracy's office over this issue, but even if Cook is sucking out loud this season, he's been with the club for 10 seasons. Put him back out for the 6th, have Reynolds ready, and if Cook gets into trouble, you go get him. In doing this, you give Cook a chance to reclaim his miserable 1st inning, and if he can't, you give the fanbase a chance to say goodbye. You give him a chance to climb the dugout stairs, tip his cap to the fans that have watched Cook his entire career, from his major league debut in relief of Shawn Chacon and Mark Corey, to his horrifying collapse on the mound in 2004 (ultimately caused by pulmonary embolisms in his lungs), to his World Series start in 2007, to today, when he got hit in the butt by a Luis Martinez ground ball. Give fans a moment to show a 10-year veteran some love and respect. His 2011 may not have earned it, but his career certainly has.

What's the worst thing that could happen, the Rockies lose? 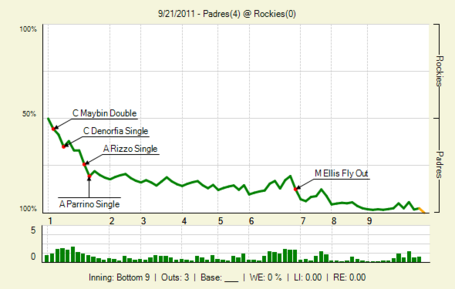