Two pitchers entered MLB rookies, only one left. Astros starter Henry Sosa was pulled after recording one out in the seventh inning, leaving him with exactly 50 innings pitched. On the other hand, despite controlling the long ball, Alex White, struggled yet again, leaving after pitching four and two thirds and allowing five earned runs.

Why does any of this really matter? I'll leave that to you.

The Rockies took a 1-0 lead in the second inning when Troy Tulowitzki scored on a Kevin Kouzmanoff groundout after current Purple Row punching bag Ty Wigginton struck out. The Astros would tie the game in the bottom of the inning when former Purple Row punching bag Clint Barmes doubled in Brian Bogusevic. The alternating pattern continued with Eric Young Jr. scoring on a wild pitch from Sosa, but the Astros would break it open in the bottom of the third.

After allowing Sosa's first career hit, a double that saw the pitcher miss first base on the way, White hit Jose Altuve and J.D. Martinez back to back, loading the bases for Carlos Lee. Lee doubled and cleared the bases. Though he would retire the next five hitters, including striking out the side in the fourth inning, White would again find himself in trouble in the fifth. He allowed two singles to begin the inning, with a wild pitch advancing the two runners to second and third. Lee hit a sacrifice fly to add another run to Houston's lead, and White's day was done. J.C. Romero entered the game and struck out Bogusevic to end the inning.

After Kouzmanoff hit his first home run in a Rockies uniform and allowing a double to Wilin Rosario, Sosa was replaced by Chris Johnson. The Rockies threatened, but Rosario was thrown at at home and Tulowitzki was unable to hit in a run. Houston threatened to increase their lead further in the seventh off of Josh Roenicke, who loaded the bases, capped off with an intentional walk to Lee so Matt Reynolds could face Bogusevic. Houston countered with Matt Downs, and Reynolds allowed the second bases clearing double of the game to increase Houston's lead to five and nail the Rockies into their coffin.

The Rockies weren't done. Just as everyone turned off the game to watch Netflix movies, Astros reliever Fernando Rodriguez walked Seth Smith. Kouzmanoff singled, and both would be brought around on Rosario's third MLB home run. Dexter Fowler almost tied the game with a long fly ball to right that was just a couple yards short of being a 2 run home run, caught by right fielder J. B. Shuck.

The game that would just never end continued with Jim Miller walking two Astros and allowing a single to load the bases in the bottom of the eighth. One run would score on a Jordan Schafer sacrifice fly, but despite an error from Fowler that allowed the runners to advance, that would be the extent of the damage.

Houston closer and Colorado native Mark Melancon easily set down the Rockies in the 9th. Way to look bad against the team that just clinched the worst 2011 record, Rockies.

If you feel like submitting yourself to more 2011 pain, tune in tomorrow at 6:00 Mountain to see Drew Pomeranz take on Brett Myers. 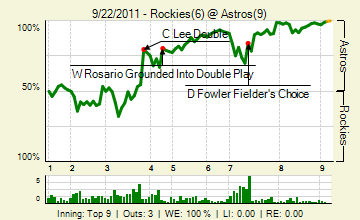