Jason Hammel pitched very well in his last start of 2011, and the Rockies offense finally overcame the Astros after 13 innings, and after losing their last nine games, in a 4-2 win on Saturday night. Hammel gave up three hits and a walk in seven innings pitched, striking out three. He allowed two runs, one in each of the first two innings, but otherwise held the Astros at bay. The Rockies bullpen added to that performance, and in all Rockies pitchers shut out Houston for eleven innings after Brett Wallace hit a solo home run in the bottom of the second.

The Rockies scored two runs in the fourth when Jordan Pacheco doubled home Mark Ellis and Chris Nelson, and then scored two more in the thirteenth as a bases loaded Nelson walk scored Thomas Field, and a Wilin Rosario sacrifice fly scored Eric Young Jr. None of the six players that scored or drove in a run for the Rockies tonight were with the team at the beginning of the 2011 season, and all six are at least somewhat questionable as to whether they will return for the beginning of the 2012 season.

While the Rockies seven relievers used after Hammel allowed a few baserunners (four walks and three hits in six innings pitched,) they locked down when it came to allowing runs, holding the Astros scoreless until the offense could rally in the thirteenth.  Matt Reynolds pitched the twelfth inning to pick up the win, and Rafael Betancourt closed the victory out with two strikeouts and a pop-out to center in the thirteenth for his seventh save of the season. The Rockies will try to salvage a split of the four game series by beating Houston in the final game tomorrow. 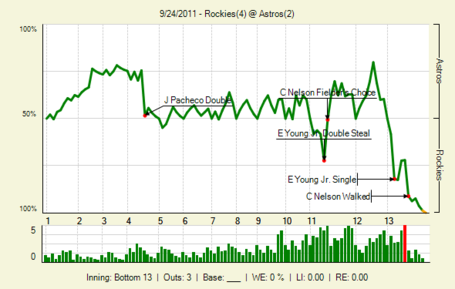