Giants 3, Rockies 1: Despite Good Outing from Chacin, Colorado's Woes by the Bay Continue

Share All sharing options for: Giants 3, Rockies 1: Despite Good Outing from Chacin, Colorado's Woes by the Bay Continue

Behind seven shutout innings from Ryan Vogelsong, the Giants beat the Rockies for the eighth time in the last nine games between the two NL West adversaries.

Vogelsong, who allowed just four hits and didn't walk anyone while racking up four strikeouts, contributed on offense as well as he scored on a two-run triple off the bat of the mighty Mike Fontenot. It was the only run-scoring hit against Chacin, as he went seven innings as well, but allowed eight hits and a walk along with the two runs. He struck out three.

The Rockies picked up a run against Sergio Romo in the eighth when Wilin Rosario, who led off the inning with a line single to left, scored on a base hit by Mark Ellis. That cut the lead to 2-1. With a chance to give his club the lead, Dexter Fowler struck out to end the inning. The Giants tacked on a run in the bottom of the inning on a sacrifice fly, and kept the Rockies off the board in the ninth.

This game, while not the most Rockies-Giants game of 2011, was still pretty Rockies-Giants. In seven games at AT&T Park in 2011, the Rockies have scored a grand total of ten runs. That is one of the most 2011 stats of the season. That, and the one where, in bases-loaded situations, Ty Wigginton has produced more outs than plate appearances (not sure if that's made up or not, but I'm banking on no so h/t to everever).

The Rox need a win tomorrow or Wednesday to avoid their first 90-loss season since 2005, and only the fifth in franchise history. 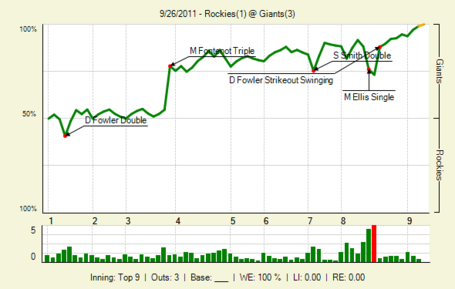 Tomorrow, Alex White will try to end his somewhat disastrous season on a good note as he'll take the mound opposite Madison Bumgarner. The Rockies really need a win, and White really needs some confidence heading into the offseason. Let it happen, baseball gods.