Alex White was making his final impression on Rockies fans in 2011, and it went a lot like his previous six shaky starts.

Perhaps the most important thing White lost tonight though was his Rookie of the Year Award eligibility in 2012.  He needed 2.2 IP to reach the threshold.  White recorded four outs too many before leaving after four innings.  While White hasn't pitched like a ROY candidate, his lingering injury and youth is masking his talent.  Between the decision to bypass his eligibility and retain their full coaching staff for 2012, the Rockies are clearly stating today they will not pander to PR.

The offense was MIA again for Colorado.  Kevin Kouzmanoff doubled to lead off the second, followed by a Jordan Pacheco single.  No runs scored, and the following three hitters struck out.  That was it for the offense, other than a Mark Ellis ninth inning single.

The loss guarantees the Rockies their worst W/L record since 2005.  Their final chance to avoid 90 losses comes in the season's final game tomorrow.  If they fail, the 2011 squad will tie the 1999 team for the fourth worst season in franchise history, trailing only 1993, 2005 and 2004.  And now for a sentence I have never spoken or written before in my life:

The baseball season will finally, mercifully end in 24 hours and we will be in the sweet offseason with no baseball. 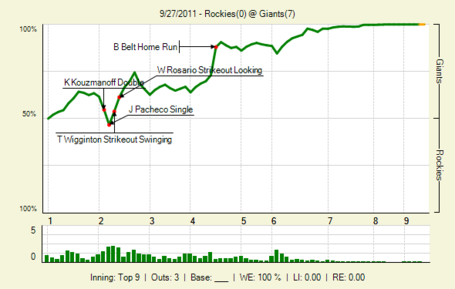