Kevin Kouzmanoff had three hits, drove in two runs, scored twice, and came up with a sparkling play in the field late to help the Rockies to a six to three victory over the Giants on Wednesday afternoon. Drew Pomeranz pitched five and two thirds innings, starting well, but getting into some trouble and allowing three runs in the sixth inning, and six hits overall. Pomeranz picked up the win, with a quarted of Rockies relievers closing out the game, including Rafael Betancourt finishing the 2011 season with his eighth save.

Eric Young, Dexter Fowler, Jordan Pacheco and Thomas Field all had two hit games for the Rockies, while Mark Ellis and Seth Smith each had a hit and a walk, leaving Ty Wigginton as the only Rockies starting position player to get on safely just once, with a hit by pitch and a zero for three afternoon.

The month of September became a bit of an extended version of next year's Spring Training, and the final game was no exception. The Rockies continue to make evaluations on players that could potentially serve parts for the 2012 team, with utility candidates Pacheco and Field playing the two most premium defensive positions, catcher and shortstop, while Ellis and Kouzmanoff continued to show how their defensive prowess could be valuable starting assets.

With Florida's loss and the Rockies win, Colorado moves ahead of the Marlins for a 2012 draft pick, with the Pirates (72-89) and A's (73-88) both within a half game of the Rockies pending the outcomes of their season finales tonight. 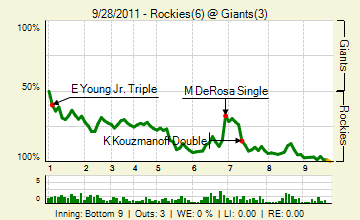