Yes, that's right, I went there.

Here's the weird thing. I had no doubt when the Rockies picked up Kevin Millwood that he was going to be a viable starter, that he'd probably look even better than he should. Not because he looked especially amazing in the Yankees/Red Sox AAA organizations, or that stats showed that he was due for a major rebound. No, I was completely sure of it because that'd just make perfect sense for the stupidity that is the 2011 Colorado Rockies.

Kevin Millwood scattered 7 hits over 7 innings, striking out 8 while walking zero. Over the 32 innings Kevin Millwood has pitched in a Rockies uniform, he has walked 4 batters. 4. Jhoulys Chacin walked 5 batters his last start. Granted, Millwood's also allowed 6 HR, which is really bad.

But it's hard to find any reason to complain about Millwood's Friday night. The Rockies offense was.... interesting, if not effective, taking down Padres pitching to the tune of a 3-0 final. Jonathan Herrera had a 3-hit night, Chris Iannetta a 2-hit night, and Dexter Fowler and Troy Tulowitzki had his as well.

Tulo also had a magnificent gaffe where he thought he had caught a ball on a diving attempt, when he did not, in fact, have said baseball. It was pretty great. 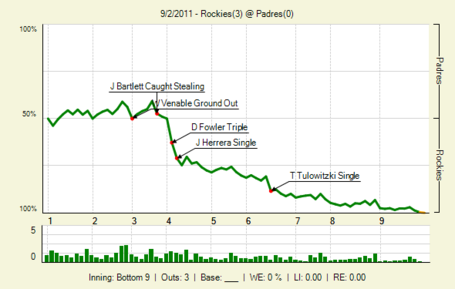