Rockies win series vs Padres as Fowler, Tulowitzki stay hot at the plate.

Share All sharing options for: Rockies win series vs Padres as Fowler, Tulowitzki stay hot at the plate.

Dexter Fowler had three hits, Troy Tulowitzki and Todd Helton two each, and a fresh from the DL Ryan Spilborghs one, but it was an important one, an RBI double coming in the middle of the Rockies biggest rally of the night during the fourth inning of a 5-4 victory over the Padres in San Diego. Alex White didn't pitch particularly effectively, especially given the park the Rockies were playing in tonight, but he wasn't particularly terrible either, with six strikeouts in five innings. He did give up three walks, and allowed two of those walks to score. The damage done by the five hits allowed, including a lead-off home run to Will Venable, would have looked a lot less severe without those free passes adding to it.

Kevin Kouzmanoff continues to quietly add stability and value at third base for the Rockies, like Spilborghs, he also had a key hit in that three run fourth inning rally, and while he hasn't been the power threat that Ty Wigginton has been, but pretty much in every other way he's proven superior than any other third baseman the Rockies have used in 2011. Fowler's hot hitting since returning from AAA on July 15 continued, this was his fourth three hit game, 19th multi-hit game, and with two doubles on the night, it marked the fifth time he's had more than one extra base hit in a game since then.

The Rockies relief corps did another solid job, with Josh Roenicke, Rex Brothers, Huston Street and Rafael Betancourt closing out the win. 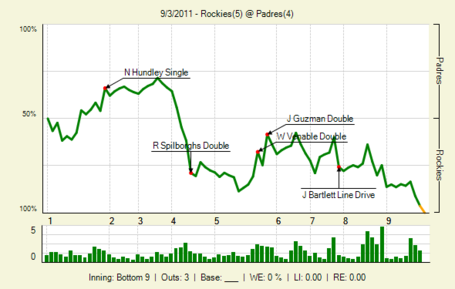