Down by one in the bottom of the 8th, two outs, a runner on third, and Andy Parrino at the plate. Who? Exactly, but Jim Tracy had him walked intentionally. Then Matt Lindstrom walked another, then Mark Ellis made an error, then Will Venable hit a bases-clearing triple and what was once a winnable game was out of reach.

I'm not saying that the intentional walk was the cause of the loss, but it was yet another in a long list of baffling managerial decisions that have plagued the 2011 season that hurt Colorado's chances of winning. I mean, what benefit did Tracy gain by putting a rookie call-up on base? A potential force at 2nd, that's it. Meanwhile, he gave the Padres an extra base-runner. There's no way that's an equal trade -- it's a manager actively hurting his team. I don't know, maybe I'm hyper-sensitive to this stupidity because I've seen the Rockies go 4-18 on Sundays.

Aaron Cook gave the Rockies a quality start, allowing three runs on four hits and four walks in six innings, but it wasn't enough to avoid getting the loss (3-9). Offensively, Dexter Fowler went 3-4 and broke his own Rockies record for triples in a season with 15. He's quietly raised his triple slash stats to a very respectable .271/.368/.431 in the leadoff hole.

The Rockies will return to Coors after managing a 3-6 record on a make or break road trip that broke them. 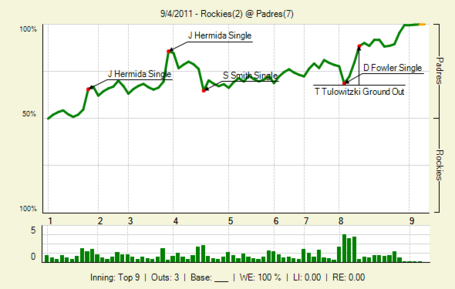