Five Diamondbacks hitters had at least two hits, and Justin Upton and Geoff Blum homered as Arizona won their tenth consecutive game over the Rockies, this time by a final score of 10-7.

The D-Backs got to Rockies starter Esmil Rogers (6-5, 6.26 ERA) early, as Justin Upton homered in the first inning. They would tack on two more in the fourth and broke the game open with five runs in the sixth inning. Rogers was responsible for six runs, while Josh Roenicke had a rare bad outing as he allowed a couple of runs on two hits in his two-thirds of an inning of work. Greg Reynolds and J.C. Romero topped it off by allowing runs in the seventh and ninth innings, respectively. No Rockies pitcher walked away unscathed on Labor Day.

For the Rockies, Dexter Fowler had a huge day, going 3-for-5 at the plate with a couple of home runs - his third and fourth of 2011. Mark Ellis (solo) and Troy Tulowitzki (three-run) also went yard for Colorado, but their taco-producing output was not enough to make up for the subpar performance of the pitching staff.

Fowler, Tulowitzki, and Carlos Gonzalez each contributed multi-hit efforts for their club. Tulowitzki's ninth-inning blast gave him an even 100 runs batted in to go along with 29 homers.

The usual stuff after the jump... 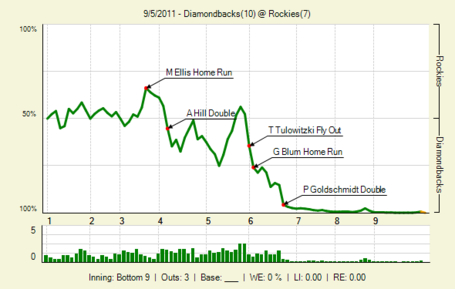 Wow, no centurions today. Look at you guys, all out there having lives and stuff. Good for you.

Tomorrow, the Rockies will attempt to break their long losing streak against Arizona as Jason Hammel (7-13, 5.15) returns to the rotation. The D-Backs will counter with Josh Collmenter (9-8, 3.18). Game time is 6:40 PM MT.