So when Troy Tulowitzki strode to the plate with the go-ahead runner in scoring position with two outs, Rockies fans had been conditioned to be pessimistic.  An ugly swing on a slider in the dirt only deepened the despair.  Then Tulo turned everything around by launching a David Hernandez curveball through the rain into the outfield seats in left-center for his 30th home run and 103rd RBI.  Suddenly, the Rockies were leading after entering the eighth inning with a 3-1 deficit.

Two out singles by Mark Ellis and Carlos Gonzalez preceded the bomb, and the Rockies piled on the Dbacks bullpen after Tulo's heroics with a Ty Wigginton single, Seth Smith triple, Wilin Rosario walk (his first career time on base), RBI single from Jordan Pacheco, and RBI walk from Dexter Fowler.  In all, nine consecutive Rockies reached with two outs.

Pacheco had a single in his first at-bat in his MLB debut and added an RBI groundout.  He made a terrible error on a tough play that directly led to a run, and Wilin Rosario gave the Diamondbacks an unearned run with a passed ball, but the debuting duo were solid otherwise defensively.

Jason Hammel pitched arguably his best game of the season after returning back to the rotation, pitching seven innings, allowing one earned run and striking out a season-best six batters.  Matt Belisle secured the final out in the eighth inning, which gave him his tenth win of the season.  He leads MLB in relief victories and is one win shy of the franchise record, set by Gabe White in 2000.

Seth Smith tripled twice and singled, Pacheco had a couple hits and Carlos Gonzalez hit a double in addition to hit clutch hit in the eighth, which pushed his batting average with runners in scoring position and two outs to .478 on the season.

It has been a tough season, but for one night - really one inning - LoDo magic returned to Coors Field. 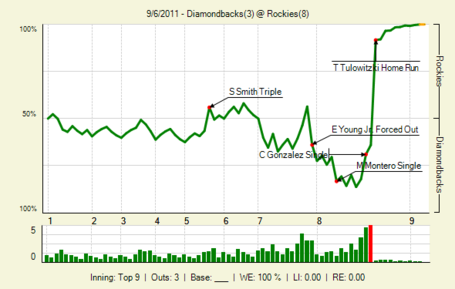