Wilin Rosario hit his first career home run. Kevin Millwood hit what may turn out to be his last career home run, and Carlos Gonzalez hit one that will fall somewhere in the non milestone middle of his career. Since all three blasts came without anybody else on base, and since they were the only offense the Rockies could muster, they became sidebars in a 5-3 loss to the Arizona Diamondbacks.

Millwood's last home run was also hit at Coors Field, off the Rockies Denny Stark all the way back in 2002. Stark also homered in that game, so at least Millwood's given up on total reciprocity for the opposing pitcher in the past decade, but he did allow Diamondbacks starter Joe Saunders an RBI single as part of a two run sixth, and when added to a two run blast given up to Miguel Montero it was damage enough.

Rosario finished with two hits, he and Troy Tulowitzki, who also had a pair, were the only Rockies to get more than one. 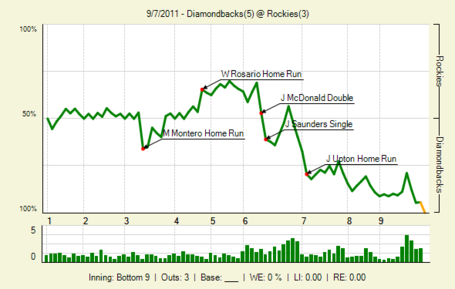