These games are the worst. When a pitcher doesn't have their best stuff, yet still manages to squeeze through 5 innings, and looks to be oh-so-close to finishing a 6th....and then everything falls apart. With the bases jammed in the 5th with one out, Matt Reynolds entered in relief of Jhoulys Chacin, striking out the only other batter he saw.

Preparing to face the ensuing batter, Reynolds looked up in surprise to see manager Tom Runnells (that's right) coming to puil him. Josh Roenicke then proceeded to allow 2 hits and a walk and before you knew it, it was 4-1. Matt Lindstrom pitched a perfect 8th, Greg Reynolds a 1-hit 9th, and then the Rockies went quietly into that night.

The bats didn't really do that poorly. 8 baserunners (6H, 2BB). Chris Nelson mangled a homer to CF, that was pretty great. Everyone else went 0-10 with RISP. That was lame.

Most interesting moment of the game has 2 nominees:

With 1 out and a runner on 1st, Seth Smith fielded a single cleanly, and short hopped the throw in to SS Chris Nelson. Nelson then had to chase the ball over to the 3B-Home line. Nelson then decided to make a godawful throw to Mark Ellis to try and pick the batter going 1st to 2nd. Ball goes into RF, run scores.

Runner at 3B, 1 out, and Carlos Gonzalez strikes out on a 2-2 pitch. Problem is, the 2-1 pitch was very low and verymuch not a strike. Yet, it was not called as such. Carlos Gonzalez had a very frustrated reaction and soon was ejected by home plate umpire Mark Carlson for jabbering from the dugout. Manager Jim Tracy came running out and had one of the angriest yelling matches I've ever seen from him with an ump. Tracy was tossed a few moments into his rant, yet made sure to give the umpire a piece of his mind for the next several minutes. 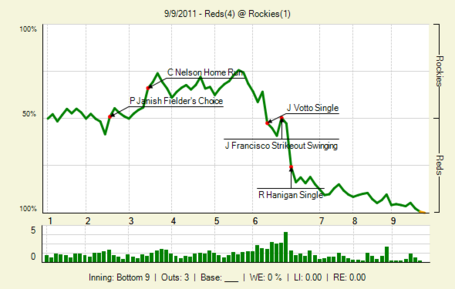