Share All sharing options for: Tuesday Rockpile: Searching for an Ace Again

Let's face it. This Rockies team is hard to predict. Even when the roster was left mostly intact, the men wearing purple have been liable to produce a dozen-win swing in either direction from what was expected. David Schoenfield of ESPN SweetSpot perfectly predictably predicts the Rockies as the most difficult team to predict.

Of course, sports fans love to predict the outcomes of seasons, even though the unpredictability of sports is what draws us to watch in the first place. PECOTA is the most popular projection system for full-season standings, but that isn't out yet. Marcel projections are out though, and from that, Replacement Level Yankees Blog has averaged several simulations using Marcel. It projects a three-way NL West division tie between the Rockies, Diamondbacks and Giants, with the Rockies getting a slight edge. So, that's fun.

That would be a pleasant surprise. Todd Helton thinks the Rockies could surprise some people. To reach win Division Title #1 in Year #20, the Rockies will need some sort of resolution in their jumbled starting rotation. More importantly, to build a strong contending team in the Cargo/Tulo window, the Rockies will need to develop an ace to replace Ubaldo Jimenez. So just who is that going to be?

One good way to look at this is to see what status of prospects have turned into aces. John Sickels has been in the prospect game a long time, and SBNation is fortunate to have him. Yesterday, he did the work to look up the prospect grades Sickels gave the top 25 pitchers in MLB in 2011 by WAR. That's fewer than one per team, so that is a good barometer for "ace," or at least significant impact pitcher.

The results are interesting. Thirteen received an A-type grade at some point, which are rare in Sickels system. Ten peaked in the B's, including Roy Halladay, Dan Haren, Cliff Lee, Jered Weaver and Chris Carpenter. Two never exceeded a C+, those being CJ Wilson and Doug Fister. 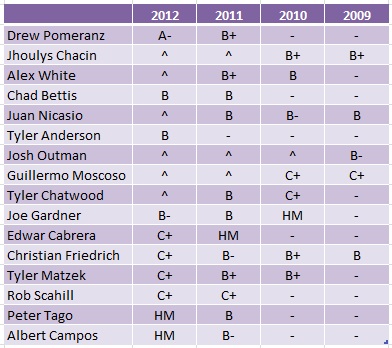 If we are extremely generous, the Rockies have sixteen future ace candidates. In the table to the left are the sixteen young pitchers, complete with John Sickels' ratings in the past four years. A ^ indicates the pitcher graduated to the majors and was not rated, a - indicates the pitcher was either not drafted/signed or was off the radar. An HM is an honorable mention.

The road to potential acedom is bleak for Edwar Cabrera, Guillermo Moscoso Rob Scahill. They need the miraculous CJ Wilson/Doug Fister run, and neither of those pitchers accomplished their rise with their original team.

Josh Outman received a B-, but he hasn't been a prospect for several years, so his MLB numbers are more reliable now, and those don't indicate sudden ace.

Tyler Anderson, Chad Bettis, Jhoulys Chacin, Alex White, Juan Nicasio and Joe Gardner are a legitimately interesting group that have maintained B-level status. If things go right for them as they did for Matt Harrison, Justin Masterson, Dan Haren and Ian Kennedy, they could make the jump to the top of the rotation.

All alone in his own category is Drew Pomeranz, owner of an A-. Since Minor League Ball went active with SBNation, Sickels has only given out three A-type grade to a Rockies pitcher - Jeff Francis (05), Franklin Morales (08) and now PomWonderful. Pomeranz' grade progression would seem to follow Madison Bumgarner, Matt Cain or Josh Beckett. Pomeranz is certainly ready to take hold of his potential.

Of course, this is all very slanted optimistic. B-type prospects turn into aces less than A-type prospects bust. Just check the two most decorated Rockies' pitching prospects in the last decade. Whoops. And ouch. What we really want to see from Sickels is the bust rate of A-grade pitching prospects and annual B-type arms. Fortunately, he's working on that for later in the week.

Comparisons from this Sickels study are hardly groundbreaking, nor conclusive, but they do provide context. No one is shocked to realize Drew Pomeranz is the Rockies' best chance to develop an ace. However, remember that the tier below has a decent shot, and there are six names that fill that tier. Considering the casualty rate of pitching prospects is so high, one can see Dan O'Dowd's strategy of hording young arms. This team needs a top flight starting pitcher, and if not Pomeranz, it will have to come from that tier.

Links after the jump.

Padres - Today's Fun Fact - Hot Corner - Baseball Nation - Jeff Sullivan points out that in the past eight years, the Padres offense has scored 1.0 runs more per game on the road than at Petco, and allowed 0.9 runs or more on the road. For reference, in that span, the Rockies' offense is +1.6 runs/game and the pitching is +0.6 runs per game at Coors Field than on the road.

Giants - Don’t Panic, 2012 is going to be awesome " The Rainy Day Fund - The ousting of Bill Neukom has brought a new philosophy. A year removed from a World Series title, Giants fans were told San Francisco would not be spending this offseason, instead saving their money for a "rainy day fund." That phrase tortures Giants fans, and it spawned this blog, which explains just how San Francisco can win the division. It is worth your time.

Baseball Prospectus | Baseball ProGUESTus: The Knuckleball Mystique: Using PITCHf/x to Distinguish Perception from Reality If that title doesn't make you want to read, I'm not sure what will. Alan Nathan, Professor Emeritus of Physics at the University of Illinois at Urbana-Champaign, provides a guest spot for BPro. And guess what....just like the "rise-ball," the supposed "flutter" of a knuckleball does not exist.

Within the precision of the tracking data, knuckleball trajectories are just as smooth as those of ordinary pitches.

In the old days, the game was more exciting - The Hardball Times - Max Marchi fuses geeky numbers with old fashioned sass to argue baseball is literally getting more boring. Tell that to 2011, Max. I like this game very much, and will believe it is the best game on earth until I have grandchildren, at which point the game will be ruined by young punks. That, sir, is law.