With nothing left to gain but a small boost to whatever pride remains within the Rockies organization through this devastating year, the Rockies pulled out a close win against Arizona to conclude the 2012 campaign, as now we all look to the future and welcome the offseason, ready to put this ugly season behind us.

Share All sharing options for: Rockies 2, Diamondbacks 1: Rox End Worst Season on High Note, Welcome to the Offseason Everyone

Rockies starter Jeff Francis was fairly steady in his final start, making a case to re-sign with the team this offseason. He struck out three over five innings, walked one batter and allowed just five hits, only one of which was at all damaging. In the third inning, Arizona center fielder AJ Pollack hit a solo home run to put Arizona up first.

Though Ian Kennedy would strike out the side in the fourth, some small ball and a key error by Diamondbacks third baseman Chris Johnson gave the Rockies all the offense they would need to secure the win. With Charlie Blackmon being hit by a pitch and moving to second base on a Jordan Pacheco single, Blackmon scored on a ground ball off the Bat of Wilin Rosario, which was thrown away by Johnson on a throw to second base. Later in the inning, DJ LeMahieu would single in Pacheco from third base, giving the Rockies the lead on two unearned runs off of Kennedy.

It would take six Rockies relievers to finish the game's final four innings, with some scattered baserunners from the free pass, but in the end the combination was successful, and Matt Belisle secured his third save by pitching the game's final out. Jeff Francis was awarded his sixth in of the season, and that was a wrap on 2012. Despite an ugly September overall, the Rockies finished their final 10 games with a 6-4 record, good for second best in the division behind the Dodgers, who swept the Rockies during that period.

So what happens now? The postseason matchups have been decided, but while these teams play for the championship, the Rockies will be looking to see which players they want to outright from the roster during October, freeing up some extra space for the upcoming Reserves Deadline in November. Meanwhile, Purple Row shifts to offseason mode. Expect some player reviews, some business analysis, and plenty of opining and pontificating from everyone!

For those of you without a lot of interest in the offseason and will be leaving us as we leave the MLB season, we hope to see you back in the Spring. For the rest of you.... fire Jim Tracy I guess?

The Rockies finish the season in last place, with a 64-98 record, three games worst than their previous worst record set in their debut 1993 season. They have also secured the #3 overall draft pick next June. 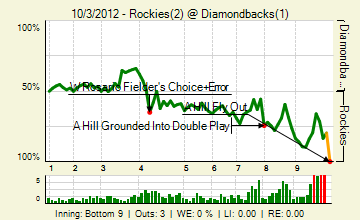