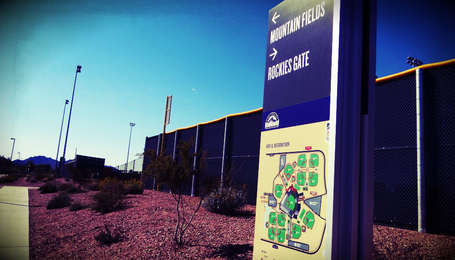 Hey Rockies fans, baseball isn't over yet and I'm not talking about the playoffs. The Arizona Fall League is set to start on Tuesday, October 9th and this season includes some of the brightest stars of the minor leagues. Last year I wrote about the experience of watching MVP Nolan Arenado and ROY candidates Mike Trout and Bryce Harper. Fans at this season's AFL can look forward to seeing next year's rookie stars, such as record-breaking stolen base leader Billy Hamilton and Future's Game MVP Nick Castellanos.

The Fall league is comprised of six teams, all located in the Phoenix area, playing in spring training facilities. There are three games played per day, two at 12:35 MST and one at 6:35 in the evening. The AFL All-star game is scheduled for November 3, at 5:10 MST and Championship game will be on November 17 at 1:10 MST.

The new guidelines this year for roster selection include up to seven players, teams can have two Low-A or first-year draft picks signed by July 13, two High-A players and three Double-A or higher players.

The star of the Rockies Fall League roster, was chosen as a replacement when Kyle Parker injured his thumb at the end of the season. Dickerson was too much to handle for CAL league pitchers early this year smashing 9 homeruns and a .245 ISO in High-A before setting up shop in Double-A Tulsa with 13 homeruns and a .230 ISO, good enough for seventh in the Texas league.

A young starter with a live fastball, Tyler was originally recruited by UCLA to play shortstop and centerfield. In 2011 he was rushed to the majors by Los Angeles where he struggled with command issues. He arrived in Colorado via the Chris Iannetta trade and in 19 appearances walked the same 11.2% of batters as he did in 27 games for the Angels.

The former CAL league MVP from 2011 was slowed by a wrist injury which prematurely ended his season and may have served as a hangover to start this year. In 2012 he struggled to get on base and hit consistently, hitting for power wasn't a problem however, as Matthes smashed 17 homeruns and was rated ninth in the Texas league with a .218 ISO. The 25 year old is running out of time and the AFL may be his last chance to make an impression on the Rockies.

Lefthanded reliever with a good strikeout rate of 10.2 K/9, but too many walks at 4.8 BB/9. After five years in the Rockies system, the Fall League will be his final chance to prove if he's 5-foot-8 or 5-foot-10.

Cory suffered a double-demotion to start the 2012 season, when he was sent back to Double-A and removed from the starters spot to work out of the bullpen. Cory worked his way back into Triple-A however and finished with a 3.06 FIP in Colorado Springs. A workhorse pitcher with a history of four seasons of at least 160 innings. Riordan has gotten by with a decent K rate of 7.4 and limiting his walks to 1.9 BB/9.

Right Handed reliever with a sidearm delivery. Woods performed well in the lower levels before hitting a speed bump in Triple-A. In 38 games of Double-A, Woods put up a 0.76 ERA and a 4.25 K/BB ratio. After being promoted to Colorado Springs for 23 games his ERA rose to 7.40 and his walks increased to 4.48 BB/9. Video of Woods,care of Muzia

Canadian catcher who attended the University of Illinois. Davis is a left handed bat who has repeated Double-A Tulsa three times. Lars saw an improvement in his AVG from .255 in 2011 to .287 this year, but his Isolated Slugging dropped to .127 in the same time period. At the age of 26 Davis can be viewed primarily as a veteran minor league catcher more than a prospect at this point.

A seven year minor league veteran with a career .601 OPS, Gonzales will serve as a Taxi Squad member in case the team needs a backup catcher and can only be activated on Wednesdays or Saturdays. I would have liked to see the Rockies front office use Will Swanner or Tom Murphy in this spot since both are eligible under the new rules.

Anthony Rendon-WAS-3B: #33 Ranked Prospect by MLB.com. Considered the top college bat coming into the 2011 draft, but has been slowed by injuries suffered in college and for the past two minor league seasons. Plays a plus defense at the hot corner. Scouts consider his approach at the plate good enough to hit for average and power, both of which he has yet to find at the minor league level.

Billy Hamilton-CIN-SS/CF: #14 Ranked Prospect by MLB.com. Switch-hitting speedster who stole 133 bags in 2011, smashed the professional baseball record with 153 steals this season. Reds are converting him to the outfield, so it should be an interesting transition to see how he performs on grass.

Mike Zunino-SEA-C: #44 Ranked Prospect by MLB.com and 2012 Golden Spikes Award Winner. Selected by the Mariners with the third overall pick in the 2012 draft. Has good bat speed and the ability to lift the ball. Has already worked his way into Double-A and continued to perform well. There is a chance Zunino could be in the Majors before the Futures Game next year.

James Paxton-SEA-LHP: #74 Ranked Prospect by MLB.com. High 90's fastball with a power breaking ball and an improving changeup. Pitched well in Double-A with a 3.05 ERA. Has a 10.6 K/9 in his minor league career.

Kevin Quackenbush-SDP-RHP: All you need to know is that he pitches for the Padres. Oh, and he has a career 0.81 ERA in the minors with a 12.7 K/9 rate. Since the Padres can create pitchers out of mud, this kid will probably become a Petco Cy Young candidate.

Nick Castellanos-DET-3B/OF: #10 Ranked Prospect by MLB.com and Future's Game MVP. Played primarily third base, but was recently moved to the outfield by the Tigers where he wouldn't be blocked by Miguel Cabrera. Hit .400 in A-ball before being promoted to Double-A this season.

Jonathan Singleton-HOU-1B/OF/DH: #25 Ranked Prospect by MLB.com. Another piece in the Hunter Pence trade, Jonathan was also a participant in the 2012 Futures Game. Singleton profiles as a power hitter very likely to be in Houston's starting lineup next season.

Yasiel Puig-LAD-OF: #96 Ranked Prospect by MLB.com. Multi-tool athlete with speed, power, athleticism. One of the most pursued international free agents in 2011 and ultimately signed by the Dodgers for 7 years and $42 million. Puig has seen very little action so far in the minor leagues and the AFL could be his big coming-out party. At 6-foot-3, 215 pounds he has the size and frame to be a solid power hitter in the game.

Javier Baez-CHC-SS: 2011 first round draft pick has already rocketed into High-A at the tender age of 19. He's a threat for power and speed, stole 24 bases and blasted 16 homeruns between Low-A and High-A this season.

Kaleb Cowart-LAA-3B: #46 Ranked Prospect by MLB.com. A switch-hitting thirdbaseman who earned a midseason promotion from Single-A to High-A in June. Has shown balanced results from both sides of the plate, hitting .280 on each side. While his average may be the same from both sides, his power is more distinct from the left where he lofted 19 homeruns and a .181 ISO.

Gary Brown-SF-CF: #79 Ranked Prospect by MLB.com and #1 prospect in the Giants organization. This centerfielder has plus tools in the outfield, but he's coming off of a disappointing 2012 campaign in Double-A. In the previous season, Brown tore up the CAL league and had many Giants fans hoping for a big league call up. Needs to finish strong to earn a shot at the Giants 25-man roster next season.

Ronny Rodriguez-CLE-SS: Shortstop with raw tools who is learning to define the strikezone. Rodriguez cranked 19 homeruns in High-A this season and a .187 ISO. Ronny is 20 years old and the #5 ranked prospect in the Indians organization. His power and youth make him an intriguing prospect at a premium defensive position.

Dellin Betances-NYY-RHP: Ranked #63 on Keith Law's 2011 ESPN prospect chart. His rankings have taken a hit in 2012 along with his ability to throw strikes. The 6-foot-8, 255 pound starter has a mechanical issue according to scouting reports and if he can figure it out, he may be in the Yankees rotation next season.

Joe Panik-SF-SS: Former St. John's infielder alongside Rockies 5th rounder Matt Wessinger. Panik is being groomed to debut in the Giants infield sometime in 2014. Has a career .312/.379/.424 slash line in A-Ball.

Christian Yelich-MIA-OF: #17 Ranked Prospect by MLB.com. The top ranked prospect in the Marlins organization. A centerfielder who owns power and speed on the bases. The lefthander hit .330 in High-A with a .184 ISO and 20 stolen bases last season.

Hak-Ju Lee-TB-SS: #32 Ranked Prospect by MLB.com and a top 10 SS prospect at #7. The top ranked prospect in the Rays organization, joined Tampa as part of the Matt Garza trade. Highlight-reel shortstop describes his defensive ability. Makes up for his lack of power with solid speed, had 37 stolen bases this year.

Johnny Hellweg-MIL-RHP: Came to Milwaukee in the Zack Greinke trade, stands at 6-foot-9, 210 pounds with a high 90's fastball. Posted Tyler Matzek-type numbers in A-Ball with a high strikeout rate, doubled with a high walk rate. His strikeouts have faded as he's reached Double-A, but his walks continue to be an achilles heel. Has a minor league career 9.4 K/9 rate and a 5.23 BB/9 rate.

Kolten Wong-StL-2B: #50 Ranked Prospect by MLB.com. Skipped High-A and posted a .287/.348/.405 in Double-A. A good gap hitter with some power, plays a solid defensive second base. Scouts claim he's ready to debut for the Cardinals next season.

Bryce Brentz-BOS-OF: #70 Ranked Prospect by MLB.com. Hit 30 homeruns with a .268 ISO in A-ball in 2011. Only to see that drop to 17 homeruns and a .176 ISO between stops at Double-A and Triple-A. Combines strength with a short and compact swing. Defensively, he's a former pitcher with a plus arm in rightfield.