SBN Awards: Players of the Year

The BBWAA will announce their MVP awards this evening. This morning, we reveal our SB Nation Players of the Year.

Share All sharing options for: SBN Awards: Players of the Year

The American League MVP race has gotten all the attention, but the National League race is just as interesting. Several different players led the MVP race over the course of the season, and we have no real idea on who will end up taking home the hardware. For our SB Nation Player of the Year Award, though, our writers only gave first place votes to three players, giving Buster Posey the runaway victory.

Posey, whose playing future seemed in doubt from a gruesome ankle injury in 2011, returned with a vengeance, leading the World Series Champion Giants with a ridiculous .336/.408/.549 line for a catcher. Overall, he led the league in fWAR (8.0), rWAR (7.2), and VORP (68.6). Ryan Braun followed his MVP season with nearly an identical season for Milwaukee, and Andrew McCutchen faded in the second half but still left enough of an impression to finish third. Carlos Gonzalez earned one sixth place vote.

Ah, the race of endless debate. Miguel Cabrera broke the near-half-century drought of the Triple Crown, yet Mike Trout was one of the best players at practically every skill that can be measured. It is likely that BBWAA will name Miguel Cabrera the MVP tonight on the strength of that Triple Crown, which is exceedingly ironic. The older writers at BBWAA have typically woven their arguments on narrative and intangibles - a winning team, baserunning, defense, a good story - while attempting not to be confined by rigid statistics. Instead, it is the statistically-minded championing the intangibles, defense and baserunning, while many members of BBWAA are pointing to numbers as the end of their argument. It is really quite weird.

At any rate, SB Nation tends to have a stable of writers that have risen to their crafts in large part due to Moneyball and the SABR movement. As a result, the Triple Crown did not leave large enough impression on SB Nation voters. 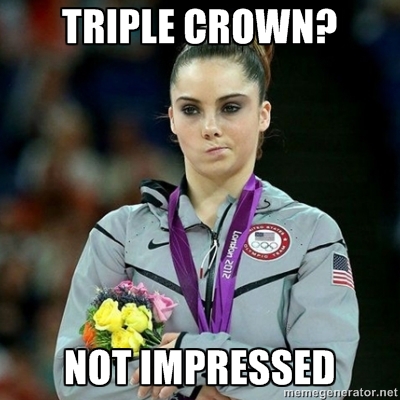 Mike Trout won in a landslide, with four voters going as far as dropping Miguel Cabrera and his triple crown outside the second slot. Congratulations Mike Trout. You might not win the BBWAA MVP, but today, you easily won the SB Nation Player of the Year. Maybe someday, that will be worth something.