Monday Rockpile: Is Wilin Rosario's Bat as Valuable As We Think?

Share All sharing options for: Monday Rockpile: Is Wilin Rosario's Bat as Valuable As We Think?

One of the things I loved about the 2012 season (and believe me there weren't many things) was watching Wilin Rosario mature at the plate. His strikeout rate went from near 30% in the first half of the season, to just over 20% after the All Star Break, and his walk percentage nearly doubled over the same time period.

Rosario was especially effective against left handed pitching. In just 118 plate appearances against LHP, Rosario managed to leave the yard 14 TIMES!!!!! - Meaning he hit a HR once every 8.4 plate appearences against lefties in 2012. Rosario became so dangerous in this spot that by season's end, he posted a .479 wOBA against lefties, which was the third highest number in all of baseball (minimum 100 PA’s against LHP) behind only Ryan Braun and Buster Posey.

What makes this even sweeter at first glance is that all of this production is coming from the catcher position - Historically one of the weakest positions offensively. However that might be changing. Below is a table showing the average major league OPS, the average OPS posted by catchers, and the difference in OPS points between the two over the last 15 years. (You can click on the image to get a larger picture) 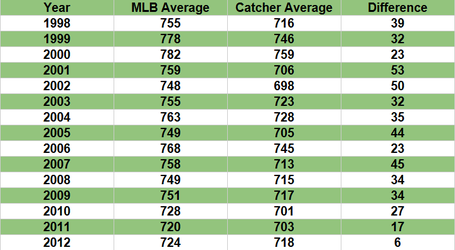 Through 2009, there's was generally a sizeable gap between the average major league OPS and the average catcher OPS. Only 2000 and 2006 saw the gap drop below 30 points, and both times it immediately swelled back to at least 45 points the following season. However over the last three seasons, we've seen a consistent plunge in that gap; and last season, the difference was almost nonexistent.

For the Rockies, this brings up an interesting and difficult question - Just how valuable is Wilin Rosario's bat at the catcher position? It's worth asking because as good as Rosario has been offensively, he still has a long way to go before his defense is acceptable. If that part of his game doesn't improve next season, the Rockies will have to seriously consider moving him to another position as the advantage of a big bat behind the plate isn't as rare as it was as little as five years ago.

Of course, none of this is set in stone; Rosario could make major improvements on his defense and render the point moot, (and he deserves every opportunity to make this happen), but if he can't, then the discussion of how his bat plays at his current position is absolutely on the table. I have little doubt that Rosario will be a strong offensive force for the Rockies in the coming seasons, but if catchers across the league are no longer going to collectively post some of the worst offensive numbers in baseball, then Rosario's defense could easily erode the value his stick provides.

The Rockies' PR staff has revealed some of the highlights on next year's Spring Training Schedule, and Patrick Saunders has all the important details covered. Make your plans now!