Share All sharing options for: Tuesday Rockpile: Shedding the Cloak of Mediocrity

On one hand, it might be generous to call the Rockies franchise "mediocre." After all, they have produced 7 winning seasons, 12 losing seasons, and zero .500 seasons. They sit at 142 games below the break even mark as a franchise at 1437-1579. Their three highest win totals have come in the last six years, and even in that stretch, Colorado is a measly 488-485.

Clearly, the Rockies do not have a track record of winning. Of the 30 MLB franchises, 28 have won a division championship. In 19 tries, the Rockies have come back empty handed every time. Their partner in title-less territory is hardly without decoration though, as the Florida Marlins have won two World Series in spite of never finishing atop the NL East.

Just as the Rockies' franchise is one of two to never win a division title, they are also just one of two to avoid a 100-loss season, joining the Angels. The Yankees have lost 100 games, though they were called the "Highlanders" the last time that happened, a century ago. The younger Rays and Diamondbacks have done it.

The Rockies are a fascinating display of never being great, and never being terrible. In the end, that cycle may hurt. In 20 MLB amateur drafts, they have selected in the top 6 picks just once. Hello, Greg Reynolds. Sometimes, "you have to be bad before you can be good."

In Jonah Keri's "Extra 2%," Rays GM Andrew Friedman confessed he made little effort to building the 2007 Devil Rays, making them a developmental bridge for 2008.

The Devil Rays hatched a plan. Rather than conducting exhaustive searches for talent or spending millions of dollars on players who could help the team win a few more games, the D-Rays would let nature take its course.

"Winning 66 or 71 games didn't make a dramatic difference to us," said Friedman. "It was about putting ourselves in a position to win 92-plus."

That is a plan the Rockies have followed once, in 2005.

Think comparing to the savvy Rays is unfair? Compare to the Diamondbacks, who have one World Series title, five division titles, four last place finishes and a 111-loss season.

Is there some tangible reason for the Rockies' ship to perpetually float in the marina, rather than sink or turn into a phoenix and fly off like every other franchise at least once? Perhaps the ownership-advanced bar of success is to remain palatable, never risking to reach new heights. Their track record of free agent signings and indefinite contracts in the front office would support this. Maybe the answer is Coors Field. The friendly confines provide too much of a home field advantage for a bad team to be truly terrible, but the reverse Coors effect provides too much of a hindrance for a good team to be truly great. There might be something to that too.

The good news is that this string of perpetual mediocrity will end eventually. The bad news is that 2012 does not appear to be that year. Expectations are probably the lowest they have been around the Rockies since 2007, yet they are too talented to be considered a likely last place team. Marking the Rockies down for 2nd-4th place is the easiest call to make every year, but especially this year. If they were to break the mold and end in last place, 100 losses or a division title, I'd put my odds on the latter. Here are the current projected standings according to ZIPS.

Hey, just two games off the pace for a division championship. Maybe they can pull it off? We can hope.

Patrick Saunders: Rockies Mailbag - Nothing new here. But note these will be produced every Tuesday.

Veterans to have leeway during spring | ColoradoRockies.com: News Nowak touches on a note also produced out of the Post over the weekend, stating that the Rockies are aware their roster is old and won't push it in Spring Training.

Colorado's Jim and Chad Tracy are enjoying working together but staying focused on their jobs. | ColoradoRockies.com: News

Uni Watch " Uni Watch Exclusive: Knob Job Update Baseball teams are starting to get more creative with the designs on the knobs of their bats. Anywhere to get a leg up on the competition, right? Interestingly, the Rockies are leading the way in intricacy. 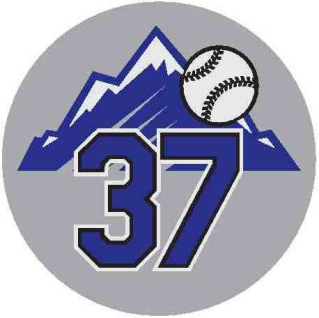 Interesting they chose Greg Reynolds' number for the demo. The number has not been reissued to anyone on the 40-man roster.

Now Taking Orders for Miguel Cabrera’s "¿Si or No?" T-Shirts | Walkoff Woodward A must have for a Tigers fan.

Royals Lock Up Catcher Salvador Perez Through 2019 - Baseball Nation - This is one of those contract extensions that looks like a lose-lose at first blush, but is much more likely a win-win. Points for creativity.

The development of Ian Kennedy - Troy Patterson profiles one of the biggest breakouts in the division from 2011, noting Kennedy obtained higher velocity and a lower release point as the season wore on.

The Winter Of Ned - True Blue LA - So Ned Colletti attended the Oscars.

Padres outfielder Kyle Blanks appreciates baseball journey | padres.com: News - He is 6'6", 270, has an MLB career 105 OPS+, and a .905 OPS in 7 minor league seasons, including a .961 mark in 2011. These are not attributes that allow a player to be forgotten. Yet Blanks most certainly has been. With Will Venable taking one corner outfield spot and new acquisitions Carlos Quentin and Yonder Alonso penciled in for LF/1B, Blanks is once again the forgotten man. Jesus Guzman, Mark Kotsay and Chris Denorfia might even make Blanks a notapadre.

Former outfielder Burrell may join coaching staff | SFGiants.com: News - Maybe he just wants to hang around and film more scenes of "The Machine" with Brian Wilson.