The name "Jamey" means "he who supplants," a fitting description for an aged veteran who persistently overcomes the odds of Father Time to push a younger, more talented pitcher off the roster. Jamie Moyer has been the topic of many articles this spring, but he has yet to officially earn a roster spot in spite of his 1.00 Cactus League ERA. Another Jamey is doing the name meaning justice though. You may have noticed the subtlety of the different spelling.

Yesterday, word came out of Glendale that two-time Rockie Jamey Wright had made the Los Angeles Dodgers as a reliever, his ninth organization. He hasn't signed a major league contract in the offseason since December 2004, instead going into camp on as a non-roster invitee on a minor league deal every year since. And every season, he has made the club. That is seven straight seasons, with six different teams. Moyer was a teenager before Wright had his first birthday, but the longevity of old Jamey is still impressive.

It also provides an opportunity to reflect on Rockies draft picks. Jamey Wright was selected by the Colorado Rockies in the first round, in 1993. Before the organization experienced their first All Star Break. In Colorado's 20th season, Wright is still in the majors, which is more than most of his brethren can say.

In 20 amateur drafts, the Rockies have selected a pitcher in the 1st round 14 times. Two never reached the majors (Doug Million and Mark Mangum). One didn't sign (Matt Harrington). Two have been in the minors only a short while (Tyler Matzek and Tyler Anderson). Two should have reached the majors by now but have not (Christian Friedrich and Casey Weathers). Three reached the majors in short, fleeting stints (John Burke, Matt Roney, and Greg Reynolds). Two ended up anchoring the Rockies' rotation for a while but are now on the outside looking in of the MLB picture (Jason Jennings and Jeff Francis).

That leaves two 1st-round pitchers in 20 drafts that are guaranteed MLB jobs on Opening Day of 2012. One is Wright (1993), the other Jake Westbrook with St. Louis (1996). Drafting pitchers is difficult to be certain, but the Rockies' yield has been tough to swallow. The number of first round picks holding on is competitive in the division, but they also were the two oldest picks of any on the list below.

The Rockies are the only team in the division to receive zero yield on their 2012 Opening Day pitching staff from first round picks. Arizona acquired their ace by trading Scherzer and Schlereth, and they'll get Trevor Bauer soon. And Jarrod Parker will count towards that number soon, and he was the chip that brought Trevor Cahill. It is hardly a new story, but first round pitchers are where Colorado has fallen behind.

That is a reason, as we know, that the Rockies traded Ubaldo Jimenez for two first-round picks from Cleveland. Drew Pomeranz has locked up a rotation spot and is pitching well. That is a good sign, as he might have to carry the value of the Ubaldo-haul himself. The Rockies have made Alex White a reliever, significantly capping his ceiling value. The move is not permanent as of now, but it is under consideration.

Tyler Colvin doing his best to stick with Colorado Rockies - It is looking more and more likely that the Ian Stewart trade will indeed provide at least one player to the Opening Day roster, with Tyler Colvin nabbing the 4th outfielder postion. He can play all three outfield positions and is hitting well.

Colorado Rockies' Juan Nicasio making great comeback, may be solid sleeper pick - Fantasy Baseball - ESPN - Eric Karabell suggests Juan Nicasio should be getting more attention than he has in fantasy world, then analyzes the rest of the Rockies rotation by saying he would pass on them all in fantasy. Is Juan Nicasio the Rockies' best fantasy starter?

Rockies' Juan Nicascio fielding questions for next "Fan Mail" | On the Rox — Colorado Rockies news — Denver Post Despite the misspelling, I am confident the questions directed will be answered by the right guy. Ask away.

Rockies' Jason Giambi takes pride in being a mentor - This is actually a piece done by the paper that covers the Diamondbacks. Giambi's intangibles cannot be contained!

Spring Training Stats That Matter | FanGraphs Fantasy Baseball - Mike Podhorzer tackles the spring snark by trying to prove some spring stats do matter, namely strikeouts and walks for pitchers. Essentially, projections based on previous season data is far more predictive, but including spring BB/K for pitchers does have some correlative value. He does not analyze hitters, but if the result is similar, which would be unsurprising, that would be bad news for Dexter Fowler.

COMMUNITY FORECAST - It's that time again. Help Tom Tango forecast playing time for the 2012 Rockies. He'll need all the help he can get with this roster.

And lastly, to further show how big the Rockies are in Venezuela, Rafael shared this front page of the Meridiano, the Venezuelan newspaper: 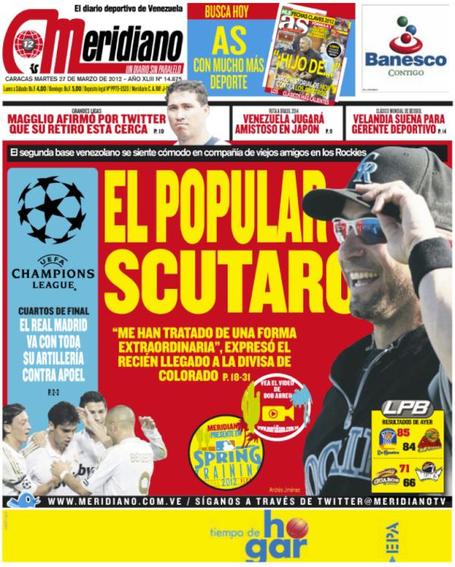